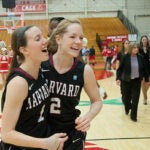 David W. Oxtoby ’72, president of Pomona College in Claremont, Calif., has been elected president of Harvard’s Board of Overseers for 2013-14.

Both Oxtoby and Chang will be serving the final year of their six-year Overseer terms.  They will assume their new roles following Commencement this spring, succeeding Richard A. Meserve, J.D. ’75, president of the Carnegie Institution for Science in Washington, D.C., and Lucy Fisher ’71, a film producer and co-head of Red Wagon Entertainment.

“David Oxtoby and Lynn Chang are two distinguished educators who bring invaluable and complementary perspectives to the work of the Overseers,” said President Drew Faust. “We will be fortunate to have them leading the board next year and to continue benefiting from their insight and guidance.”

Oxtoby has served as president at Pomona since 2003.  He is also a professor of chemistry at Pomona, where he continues to teach environmental chemistry.  Under his leadership, the college has adopted a new general education curriculum, created departments of computer science and media studies, and pursued interdisciplinary initiatives in such areas as neuroscience and environmental analysis, while also enhancing its resources devoted to the arts.  It has launched a range of sustainability efforts, maintained its commitment to need-based financial aid, and intensified its outreach to high school students from historically underrepresented groups.

A distinguished physical chemist, Oxtoby received his bachelor’s in chemistry and physics summa cum laude from Harvard in 1972 and his Ph.D. in chemistry from the University of California, Berkeley, in 1975. He joined the faculty of the University of Chicago in 1977, was appointed full professor in 1986, and was later named the William Rainey Harper Distinguished Service Professor. He also served as dean of the Division of Physical Sciences at Chicago from 1995 to 2003. The author or co-author of numerous scientific articles on such subjects as light scattering, chemical reaction dynamics, and phase transitions, he is the co-author of two popular textbooks, “Principles of Modern Chemistry” and “Chemistry: Science of Change.”

Since his graduation from Harvard College in 1975, violinist Lynn Chang has devoted his career to performance as a soloist and chamber musician and to serving as an educator on the faculty of such institutions as Boston University, the Boston Conservatory, the Massachusetts Institute of Technology, and the New England Conservatory of Music.

A founding member of the Boston Chamber Music Society and a top prize winner in the international Paganini Competition, Chang has appeared as a soloist with orchestras across the United States, as well as in Beijing, Taipei, and Hong Kong.  He has performed with members of the Juilliard, Tokyo, Cleveland, Vermeer, Muir, and Orion string quartets.

A native of Boston, he began studying the violin at age 7 and attended the Juilliard School before coming to Harvard.  As an undergraduate, he was part of a memorable performance trio that included cellist Yo-Yo Ma and pianist Richard Kogan.  He has continued his collaboration with Ma over the decades, including their world premiere performance of Ivan Tcherepnin’s “Double Concerto for Violin, Cello, and Orchestra” with the Greater Boston Youth Symphony Orchestra, which received the Grawemeyer Award for music composition in 1996.  In addition, he collaborated with Dawn Upshaw on the Grammy-winning CD “The Girl With Orange Lips.”

In 2001, UMass Boston’s Institute for Asian American Studies honored Chang with its first distinguished leadership award for his achievements as an educator and musician. In December 2010, Chang performed at the Nobel Peace Prize ceremony in honor of the absent laureate, the writer and human rights activist Liu Xiaobo.

As a Harvard Overseer, Chang is vice chair of the committee on humanities and arts, as well as a member of both the executive committee and the committee on institutional policy. He serves on the visiting committees to the departments of East Asian languages and civilizations, Germanic languages and literatures, and music, and is one of the Overseers’ liaisons to the annual Arts First festival.