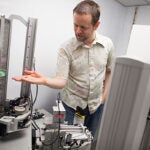 When timing is everything

Scientists at Harvard may have new hope for people struggling with obesity.

A study conducted in collaboration with researchers at Harvard-affiliated Massachusetts General Hospital hints at a future where doctors could deliver the weight-loss benefits of gastric bypass surgery without the surgery. In a study described in a March 27 paper in Science Translational Medicine, researchers found that the surgery caused drastic changes to microbes in the guts of mice. When those microbes were transferred into the guts of sterile mice, the result was rapid weight loss.

“Simply by colonizing mice with the altered microbial community, the mice were able to maintain a lower body fat, and lose weight — about 20 percent as much as they would if they underwent surgery,” said Peter Turnbaugh, a Bauer Fellow at the Faculty of Arts and Sciences’ Center for Systems Biology, and one of two senior authors of the paper.

As striking as the results were, they weren’t as dramatic as they might have been.

“In some ways we were biasing the results against weight loss,” Turnbaugh said, explaining that the mice used in the study hadn’t been given a high-fat, high-sugar diet to increase their weight beforehand. “The question is whether we might have seen a stronger effect if they were on a different diet.”

“Our study suggests that the specific effects of gastric bypass on the microbiota contribute to its ability to cause weight loss, and that finding ways to manipulate microbial populations to mimic those effects could become a valuable new tool to address obesity,” said the other senior author, Lee Kaplan, director of the Obesity, Metabolism & Nutrition Institute at MGH.

“We need to learn a good deal more about the mechanisms by which a microbial population changed by gastric bypass exerts its effects, and then we need to learn if we can produce these effects — either the microbial changes or the associated metabolic changes — without surgery,” added Kaplan, an associate professor of medicine at Harvard Medical School. “The ability to achieve even some of these effects without surgery would give us an entirely new way to treat the critical problem of obesity, one that could help patients unable or unwilling to have surgery.”

Turnbaugh warned that it could be years before the research contributes to treatment, and that any procedure tied to it would likely not be for someone looking to lose those stubborn last 10 pounds. Rather, the technique may one day help dangerously obese people who want to lose weight without the trauma of surgery.

“It may not be that we will have a magic pill that will work for everyone who’s slightly overweight,” he said. “But if we can, at a minimum, provide some alternative to gastric bypass surgery that produces similar effects, it would be a major advance.”

While there had been hints that the microbes in the gut might change after bypass surgery, the speed and extent of the change came as a surprise.

In earlier experiments, researchers had shown that the guts of both lean and obese mice were populated by varying amounts of two types of bacteria — firmicutes and bacteroidetes. When mice undergo gastric bypass surgery, however, it “resets the whole picture,” Turnbaugh said.

“The post-bypass community was dominated by proteobacteria and verrucomicrobia, and had relatively low levels of firmicutes,” he said. What’s more, Turnbaugh said, those changes occurred within a week of the surgery, and were lasting — the altered gut microbial community remained stable for months afterward.

There is plenty left to uncover about what exactly is driving the weight loss in mice, the researchers said.

“A major gap in our knowledge is the underlying mechanism linking microbes to weight loss,” Turnbaugh said. “There were certain microbes that we found at higher abundance after surgery, so we think those are good targets for beginning to understand what’s taking place.”

In fact, he said, the answer may not be the specific types of microbes, but a by-product they excrete.

In addition to changes in the microbes found in the gut, researchers found changes in the concentration of certain short-chain fatty acids. Other studies have suggested that those molecules may be critical in signaling to the host to speed up metabolism.