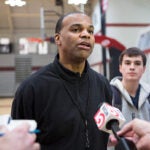 Going back to the dance

Bundled up against the morning chill, tourists in Harvard Yard blinked in befuddlement as Currier House upperclassmen in green bathing suits cheered wildly as they raced a brisk victory lap past Harvard’s stately brick buildings.

Welcome to Housing Day at Harvard.

Freshmen, who spend their first year on campus in dormitories in Harvard Yard, were sorted into one of Harvard’s 12 upperclass Houses on Thursday. To welcome incoming residents, upperclassmen poured into the Yard sporting their House colors, brandishing thundersticks, and crowd-surfing their mascots, all while chanting support for their own House — and jeering at the others.

Early in the morning, Pforzheimer House residents and tutors gathered in the “PfoHo” dining hall to don House swag, affix temporary tattoos, and get fired up to welcome the new residents.

“It’s important to let the freshmen know that they’re welcome at the Houses,” said PfoHo resident Elizabeth Harvey ’14. “It’s also one of the few days that the House rivalry is out in full force, so we really want to show our spirit.”

Amid a sea of cheering PfoHo students, resident tutor Neal Dach said that of course his House had the most spirit. “We have four mascots!” he exclaimed, pointing to an approaching quartet of dancing polar bears. “Clearly, we’re four times as good as the other Houses.”

The PfoHo residents charged the Yard and lined up to high-five the oncoming polar bears, but turned with exuberant fury on the Eliot House mascot as it sneaked in to try to steal their thunder. The elephant went down hard as the crowd triumphantly shouted, “Elephant down! Elephant down!”

As the timeless debate for House supremacy raged outside, representatives from each House, including Jillian Smith ’14 and Mercer Cook ’14 of Cabot House, waited in the basement of University Hall to receive the names of incoming residents.

“When we get the letters, we bring them to our people, who are all out there chanting,” Smith said, raising her voice to be heard over the din. “Then we run into the dorms to welcome all of the new residents.”

“Excitement is high. Everyone’s blood is pumping. It’s just amazing,” Cook said, adding that Cabot’s organizers nearly ran out of swag for the 200 residents who showed up in the dining hall that morning. “People from all across House life come out for Housing Day, because it’s so exciting.”

The festivities continued when the freshmen headed for lunch at Annenberg Hall, outside which were bouncy castles, games, and even a rabbit petting zoo — the latter reflecting the mascot of Leverett House. Inside, upperclassmen stood on tabletops, shouting welcomes to new residents, wrapping them in hugs, and showering them with swag.

Freshman Carolyn Pushaw, who got into Pforzheimer House along with block-mate Rebecca Grzyb, beamed as she tugged a PfoHo T-shirt over her head.

“I always wanted to live in the Quad, actually,” Pushaw said. “It’s a little far away, but now that I’m in it, I’m so excited. It’s got beautiful rooms and a great community. I can’t wait!”

“I do ceramics, and they have a ceramics studio in Quincy, so this is perfect,” he said. “Housing Day is so cool. I think sometimes Harvard struggles with showing School spirit. But looking around today, it’s great to see so much enthusiasm, to see that Harvard students care so deeply about being here.”