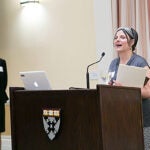 The latest bathroom technology is everywhere on Harvard’s campus: low-flush urinals, dual-flush toilets, metered faucets, and hands-free paper towel dispensers. But sometime, take a step into the past and enter Beck-Warren House, where the second-floor bathroom is so preserved it could be a museum.

In 1891, the home’s second owner, Henry Clarke Warren, who was handicapped after injuring his spine as a child, outfitted his bathroom with special features such as a call bell and a two-tiered, zinc bathtub. The reclusive Warren lived on the second floor, where he installed other call bells, skylights, a heated sunporch, and a specially designed bed. He heated his rooms to 90 degrees as a respite from his chronic pain. Despite his lifelong suffering, Warren attained distinction in his field with his pioneering research in Sanskrit and Pali texts. He worked standing — with the aid of crutches — but eventually this became impossible so he worked kneeling on a chair, supporting his weight by leaning on his elbows. Warren’s great friend Charles Lanman, a Sanskrit professor at Harvard, once joked with Warren about the latter’s “trouser knees,” which were frayed from his constant kneeling. Warren answered, “Ah, but when St. Peter sees those knees, he’ll say, ‘Pass right in, sir, pass right in.’”

By the 1980s, the extraordinary bathroom was featured in a mystery novel, one of a series by Amanda Cross. She wrote: “Janet was found in an inebriated state in an ancient bathroom in some old frame house where the English Department hangs out …”

Just outside the bathroom is another curious feature of the house: a trap door in the hallway floor believed to have been used to hide runaway slaves by the home’s original owner, Harvard Latin Professor Charles Beck. The door was discovered in the 1940s when workers found old draperies, musty carpets, a bed, and a dresser with a photograph of a cow on it. The secret passageway was later sealed off when students were found playing in there.

Upon his death in 1899, Warren left most of his estate, including this house, with its interesting past, to Harvard, which had “provided him a sanctuary unlike any he had been able to achieve within his family.” A year later the house was moved slightly to accommodate construction of the Harvard Union (now called Barker) and currently serves as office space for the faculty and staff of Celtic languages and literatures, folklore and mythology, and the Mahindra Humanities Center.