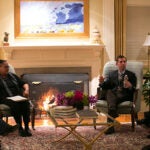 Harvard University and Homeowner’s Rehab Inc. (HRI), a Cambridge-based nonprofit, have agreed to terms on a property transfer for the Putnam Square Apartments at 2 Mt. Auburn Streetthat will ensure the building remains affordable housing.

Harvard has required HRI to preserve the 94-unit building as affordable housing for senior citizens for a minimum of 30 years, and ensured that residents’ eligibility and their rent calculation will not change.

“We are pleased to reach this milestone with a local nonprofit organization that has created and preserved approximately 2,000 affordable units in Cambridge and brings direct expertise in the management and support of senior affordable housing,” said Christine Heenan, vice president for Harvard Public Affairs and Communications. “All of the parties involved — residents of the building, City and State government, Harvard, and HRI — shared a commitment to preserve the property as affordable for the long term.”

“The City, HRI, and Harvard have a long track record of working together to successfully create and preserve affordable housing in Cambridge,” said Robert Healy, Cambridge’s city manager.  “This is the latest chapter in that success story and we are pleased to see this property remain an important element in the City’s portfolio of affordable units available to our senior citizens.”

“HRI is very grateful to Harvard, the Commonwealth, the City of Cambridge, and the Tenant Association for the trust that you have placed in us and we assure you that we are fully committed to meet your expectations,” said HRI Executive Director Peter Daly. HRI has developed more than 1,400 housing units and owns more than 1,150 units in Cambridge — the vast majority of them rented at low to moderate-income rates.

The City of Cambridge, Harvard, and HRI have partnered before to preserve affordable housing in Cambridge.  Last year, Harvard and HRI worked with the City to preserve long-term affordability at the Chapman Arms Apartments through the property’s sale to HRI. The sale was the first implementation of the State’s then-new preservation statute, Chapter 40T.

Harvard and the City of Cambridge have also worked together to improve the quality of life in the City through a range of education, arts, environment, and affordable housing partnerships. In recent years, Harvard has helped create and preserve more than 600 affordable units in Cambridge through its 20/20/2000 Affordable Housing Initiative, by building new affordable housing as part of University housing development, and by selling housing units to the City of Cambridge at rates well below market level to enable long-term affordability.