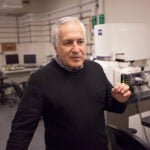 NPR’s Block shares lessons from the field in Radcliffe visit

When a large truck rumbled past her Cambridge hotel this week, Melissa Block’s heart jumped. The sound reminded the journalist of her trip to China for a series of feature stories prior to the 2008 Beijing Olympics.

“It still comes back,” Block told a group of students gathered at the Radcliffe Institute for Advanced Study on Monday. The host of National Public Radio’s “All Things Considered” was preparing for an interview when a massive earthquake struck Sichuan Province. The disaster left 70,000 people dead and millions homeless.

Her reporting from China was perhaps the hardest assignment of her career, Block told the Harvard undergrads during lunch, and later a crowd that jammed the Radcliffe Gymnasium to hear her speak. She described following a couple as they searched frantically for their young son in the rubble of their collapsed apartment building. An excerpt from her final report — with her voice wavering and almost breaking — reverberated in the gym’s vaulted hall, and included the cries of the husband and wife who learned their son was dead.

“I have never narrated a story that way before or since,” said Block ’83, who was on campus for a day of discussions sponsored by Radcliffe. But while many commended her work, she said, some listeners complained that the piece “exploited this family’s excruciating grief.”

The radio host defended the work as part of NPR’s broader mission to vividly capture the human experience. The family, she said, included her in their heartbreaking search. They “seemed to want their story told, and I hope that by telling it we might help people half a planet away to understand on a visceral level what had happened to so many thousands of families in China.”

“That intimate exercise in storytelling,” the ability to capture a listener’s attention and connect him or her to a time, a place, or a person, is what Block called “our true North.” With a news cycle in “overdrive,” that steady formula, she said, will help radio shows like hers survive and thrive.

“That is what we should strive for,” she said.

To emphasize the point, she played clips from several “All Things Considered” stories for the crowd at the gymnasium — the words of an aspiring female teenage boxer, the sounds of a struggling shark being wrestled aboard a boat, and her own voice softly repeating the phrase “oh my goodness” as buildings in China crumbled around her. The packed hall hushed.

Changes in technology mean the traditional radio format has to change too, said Block, as “many more information sources [are] vying for our listeners’ attention.”

One idea in the works at NPR, she said, is a stream individual users can customize. But while such a move would give listeners the ability to pick and chose the stories they want, it would also mean they would miss “the stories they don’t know they want,” she said.

“These are the kinds of really big questions that NPR is grappling with.”

A French history and literature concentrator, Block’s career path took a serendipitous turn after college. After considering law school, she thought about working for a magazine or for a book publisher, but on something of a whim opted instead to apply at NPR. She was hired in 1985 to set up interviews for Noah Adams, then the host of “All Things Considered.” Since then Block has been a reporter, producer, director, and editor. She has hosted the show since 2003.

The organization appreciated hard work and was open to teaching anything to anyone who was willing to learn, Block said, recalling her earliest days at NPR. Adams was a priceless mentor, she said, and the women who worked there became her inspirations.

“From the beginning, women’s voices have defined the sound of NPR,” she said. On-air regulars such as Cokie Roberts, Nina Totenberg, Susan Stamberg, and Linda Wertheimer paved the way for a new wave of journalists, she said, including today’s crop of “fearless women foreign reporters.”

During her afternoon session with students at Harvard, Block said she tries to explain the more complicated stories “in a way my parents would understand.” She balked at the notion of increasingly shortened attention spans in the age of the Twitter, smartphones, and Facebook. The show’s longer-form, narrative stories that can run as long as 22 minutes get “the most passionate response” from the audience of anything NPR does, she said.

Block said her adrenaline-fueled days always yield rewards, like the time she spoke with renowned choreographer and dancer Bill T. Jones about one of his favorite songs. The interview “unfolded in this miraculous way … I felt my jaw just dropping,” she recalled. But just as often, said Block, it’s her unknown subjects who offer up moments of “radio gold.”

“You could talk to them about their pumpkin patch, or their violin-making business every week, because they have incredible things to say.”

Block is quick to credit the liberal arts education she received at Harvard with helping her develop her “expansive view of the world.” Studying things like French and history, and even playing the viola with Harvard’s Bach Society Orchestra, “all comes to bear, doing what I do,” she said in an interview with the Gazette earlier in the day. “All of those things” shaped her, she said.

Block’s advice to aspiring journalists is simple. Be hungry for information, play an instrument, learn a language, and above all, listen.

“Listen more.” Practice the “pure art of listening, being quiet,” she said. “ And go into radio.”