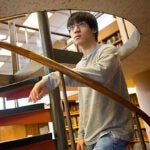 Five Harvard faculty members are among the 126 scholars being awarded Sloan Research Fellowships by the Alfred P. Sloan Foundation. Given annually since 1955, the fellowships go to early career scientists and scholars whose achievements and potential identify them as rising stars, the next generation of scientific leaders.

“The Sloan Research Fellows are the best of the best among young scientists,” said Paul L. Joskow, president of the foundation.  “If you want to know where the next big scientific breakthrough will come from, look to these extraordinary men and women.  The foundation is proud to support them during this pivotal stage of their careers.”

The fellowships are awarded in eight scientific fields: chemistry, computer science, economics, mathematics, evolutionary and computational molecular biology, neuroscience, ocean sciences, and physics.  Winners are selected through close cooperation with the scientific community.  To qualify, candidates must be nominated by their fellow scientists and subsequently selected by an independent panel of senior scholars.  Each fellow receives $50,000 to be used for research.

For Buckholtz, the fellowship will allow him to exploit new tools to discover brain circuit-level mechanisms governing impulsive decision-making, and to develop novel circuit-based treatments for impulsive symptoms in psychiatric and neurological disorders.

“I’m honored and thrilled to be selected, and excited about the work that this award will allow me to pursue,” he said. “The pathological inability to delay gratification — what we call impulsive decision-making — contributes to distress and impairment across a range of disorders, especially drug addiction and ADHD, but also schizophrenia and Parkinson’s.”

Gajos, the director of the Intelligent Interactive Systems Group at Harvard’s School of Engineering and Applied Sciences (SEAS), plans to use the award to support research into intelligent technology that improves the way that humans interact with computational systems, such as personalized tools that adapt to a user’s accessibility needs or preferences.

One of his group’s current projects, called Lab in the Wild, studies how the geography of one’s upbringing can affect the perception and processing of information. The researchers are administering an ongoing series of voluntary tests designed to elicit information about the various users’ “online culture.”

Johnston, whose research is focused on better understanding the relationship between microorganisms and the Earth surface’s evolution, said the fellowship will support his efforts to “aggressively pursue the calibration of an enzyme that is key to the modern carbon and sulfur cycles.”

Such studies of the microbial reduction of seawater sulfate, Johnston said, are critically important to understanding carbon, oxygen, and sulfur on the Earth’s surface. “With this calibration, it is our hope that we will be able to better reconstruct changes in atmospheric oxygen levels throughout Earth’s long and dynamic history,” he said.

A Benjamin Peirce Lecturer in Harvard’s Department of Mathematics, Koch plans to use the award to further her research into complex analysis and dynamical systems.

For Yin, the fellowship will support research into the fundamental aspects of string theory, and what it can show about other fields in physics and mathematics.