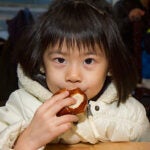 A sweet arrival in Allston

Jeff Lichtman, the Jeremy R. Knowles Professor of Molecular and Cellular Biology and a world leader in using advanced imaging techniques to study the wiring of the brain and nervous system, has been appointed the inaugural Santiago Ramón y Cajal Professor of Arts and Sciences.

The position is intended to recognize a member of the Faculty of Arts and Sciences (FAS) for groundbreaking research. Arts and Sciences professorships will be awarded in the future by FAS Dean Michael D. Smith, the John H. Finley Jr. Professor of Engineering and Applied Sciences.

“I am pleased to appoint Jeff Lichtman as the first Ramón y Cajal Professor of Arts and Sciences,” said Smith. “As a recognized leader in the development of new brain imaging techniques and an exceptional educator, he is an ideal choice for this new position. This generous gift will allow him to continue his groundbreaking research work while also engaging undergraduate students in the classroom.”

Created through a gift from Kewsong Lee ’86, M.B.A. ’90, and his wife, Zita J. Ezpeleta ’88, J.D. ’91, the five-year appointment is named for Santiago Ramón y Cajal, whose drawings of nerve cells provided the earliest foundation for modern neuroscience.

For Lee and Ezpeleta, the gift reflects their desire to impact the College and support outstanding research and teaching, and also underscores their belief in Harvard’s leadership.

“We wanted to provide President Faust and Dean Smith with the flexibility and resources to make things happen,” said Lee, “while also providing talented faculty with a foundation to do important work. Zita and I are thrilled that Professor Lichtman is the first faculty member to hold this chair; he is most deserving. Not only is his body of work incredibly important and impactful, it also has a poetic, artistic quality to it — the very definition of an arts and sciences professorship.

“We’re quite pleased,” Lee added. “There’s tremendous satisfaction in fulfilling a need, in recognizing outstanding teaching and scholarship, and we encourage other alumni to consider similar opportunities.”

Said Lichtman: “I am extremely happy to receive this honor. My work, in the long run, is focused on trying to develop approaches for producing a detailed wiring map of the brain. That is my goal for the next five years, so it’s wonderful that donors are supporting this type of research.”

The challenge in producing such a map, Lichtman explained, is that while other organs — such as the kidneys or lungs — can be understood by studying their underlying cellular structure, the same cannot be said for the brain.

“Where other organs are made up of a handful of cellular motifs, in the brain there are still an unknown number of different kinds of cells, and they’re arranged in a very complex wiring diagram,” he said.

Further complicating matters is the fact that different brain regions perform different functions. Also, much of the wiring is the result of learning, and not a genetic mechanism. Other hurdles include the massive amount of data produced by imaging all the connections in the brain. A single cubic millimeter of brain tissue, Lichtman said, would produce as much as two petabytes of data, or more than 2 million gigabytes.

In an effort to overcome those issues, Lichtman, Joshua Sanes, the Jeff C. Tarr Professor of Molecular and Cellular Biology, and a team of researchers in 2007 developed Brainbow, a process that used a combination of fluorescent proteins to label individual neurons with a distinctive color. Where earlier techniques allowed for mapping only a handful of neurons at a time, Brainbow was capable of labeling more than 100 neurons simultaneously, resulting in the most detailed images of neural wiring ever produced.

More recently, Lichtman has led the development of an automated technique that relies on serial electron microscopy to produce images, and computer algorithms to label individual neurons with different colors. In collaboration with Hanspeter Pfister, the An Wang Professor of Computer Science at the School of Engineering and Applied Sciences, Lichtman is now working to speed up the process, and increase its accuracy.

Armed with the brain’s wiring diagram, Lichtman said, researchers can begin working to devise ways to treat disorders related to how the connections in the brain work.

“There are a wide number of diseases — psychiatric disorders in adults or learning disorders in children — for which there is no doubt there’s something wrong, but there is no histological trace,” he said. “The problem is simply that we don’t yet have the tools to see it because we need to study the brain’s wiring at the level of individual synapses. There are probably diseases that would be considered connectopathies — pathologies of connection. Understanding those is one reason — maybe the best reason — why there should be support for this general approach.”

For Lichtman, teaching is about more than educating his students — it also proves to be an invaluable part of his research.

“Undergraduate teaching, particularly with the talented students we have at Harvard, is particularly rewarding,” Lichtman said. “For me, at least, the requirement to verbalize an idea is an essential part of my understanding. If I didn’t teach, I would know a lot less about what I do, and I think, for many professors, teaching is valuable in a similar way.

“Of course, I remember how important it was for me when I first heard about how a synapse works; I remember the impact that had on me,” he added. “To now be the person who’s telling students about that — there is a certain vicarious pleasure that comes from seeing a student’s eyes light up in the classroom.”