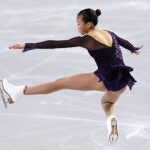 A league of her own

Oprah Winfrey, who has consistently used her success as a talk show host and media entrepreneur to promote education, civic engagement, and charitable works, will be the principal speaker at the Afternoon Exercises of Harvard’s 362nd Commencement.

“Oprah’s journey from her grandmother’s Mississippi farm to becoming one of the world’s most admired women is one of the great American success stories,” said Harvard President Drew Faust. “She has used her extraordinary influence and reach as a force for good in the world, with a constant focus on the importance of educational opportunity and the virtues of serving others.”

Winfrey’s nationally syndicated television show ran for more than two decades, drawing an audience of more than 40 million viewers a week in the United States and reaching 150 countries around the world. She has risen to become one of the world’s leading media executives through her production company, Harpo Studios, the magazine “O, The Oprah Magazine,” and OWN: Oprah Winfrey Network, which debuted in 2011.

She has launched and led a wide array of educational, civic, and charitable pursuits. The book club bearing her name has stimulated reading worldwide and featured many authors who might otherwise have been overlooked. Her advocacy spurred the 1993 passage of federal legislation, known as the “Oprah Bill,” to establish a national database of convicted child abusers. Oprah’s Angel Network, a public charity formed in 1998, raised funds to establish dozen of schools, to support women’s shelters, to build youth centers, and to provide relief after Hurricane Katrina, among other projects.

Through her eponymous private foundation, she has awarded hundreds of grants to organizations that support education and the empowerment of women, children, and families worldwide. The foundation supports such initiatives as the Oprah Winfrey Scholars Program, which grants scholarships to students committed to using their education to give back to their communities, and the Oprah Winfrey Leadership Academy for Girls in South Africa, an independent school dedicated to educating girls from all nine of South Africa’s provinces. The school recently graduated its second class of young women, all of whom plan to attend college.

“Oprah Winfrey is an inspiration to people around the world who care about opening minds and serving the common good,” said Carl F. Muller, president of the Harvard Alumni Association. “I know our alumni will value the opportunity to hear from her in May.”

Winfrey will speak on May 30 during Commencement day’s Afternoon Exercises, which serve as the annual meeting of the Harvard Alumni Association. The exercises will take place in the Tercentenary Theatre of Harvard Yard, between Memorial Church and Widener Library.