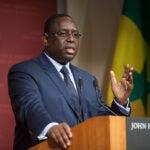 Senegal as a starting point

Majority leader says guidepost should be whether it can ‘help patients’

“Fiscal stress at the federal level demands we make smart choices,” he said during remarks at the Institute of Politics (IOP). Cantor said his priority was to make sure that “going forward, every federal research dollar should be measured against the capacity to help patients.”

The Virginia Republican said more students should be encouraged to become research scientists who will find cures for diseases, and that he supports funding research that leads to innovations but is less likely to be privately funded.

Cantor, a rising political star who co-authored the book “Young Guns: A New Generation of Political Leaders,” called for making college more affordable. To that end, he said, colleges and universities should be more transparent about costs and outcomes, telling parents and students from the start which majors are statistically likelier to lead to jobs and how much those jobs would pay — even if that meant some students thought twice about incurring debt to finance their education.

A supporter of charter schools and scholarships, Cantor said he favors educational accountability on the state level, such as Louisiana’s system of taking over failing schools. In New Orleans, he said, a single mother will have to work three part-time jobs to keep a child in a good school system if the Louisiana Supreme Court tosses out the state scholarship program.

“One of my priorities this Congress is to move heaven and earth to fix our education system,” Cantor said. Asked how, he said, “We have to do it one student at a time.”

Cantor also took in stride a protest by advocates of restoring government funding for AIDS research and needle exchanges.

A member of the Harvard College Global Health and AIDS Coalition said that two million people have died since Cantor’s last IOP appearance two years ago, when he was asked about AIDS research funding. At that time, Cantor suggested there are difficult tradeoffs involved with every federal dollar expended.

Darshali A. Vyas ’14 asked members of her group to stand as she asked Cantor whether he would call for increased AIDS research funding or ending a ban on needle exchanges. The group, center front in the audience, stood up and held signs that said “RIP Killed by the System.”

Cantor replied, “I applaud your advocacy for your cause. I understand the affliction you seek to address,” amid a chorus of “Shame” and “Lift the ban.”

Institute of Politics Director Trey Grayson ’94, who was acting as moderator, asked the protesters to sit down. They refused his request but filed out peacefully when Grayson called for assistance from Harvard security.

“It wouldn’t be Harvard without that,” Cantor said of the demonstration. “We embrace robust debate, and I really respect this institution for allowing civil debate and differences.”

Turning the talk to immigration reform, he told a student from Texas that he supports a path to citizenship for children of undocumented immigrants even if Congress cannot achieve comprehensive education reform.

“I am a grandson of immigrants,” Cantor said, whose Jewish grandparents fled pogroms in Czarist Russia. “We want more opportunity for more people than anyone else.” But he said those opportunities have to be balanced with “equal and transparent application of law.”

While there are bipartisan efforts aimed at immigration reform in Congress, he said, “some people do not want a resolution on this issue.”  He said laws should be updated and borders need to be protected, “but if there is a place to start, it’s with the kids.”

Broader consensus is available, Cantor said, for allowing foreign nationals who come to the United States for college and graduate school to stay.

“We should staple a green card to the diploma,” he said. “We want them to stay here and innovate and grow our economy.”