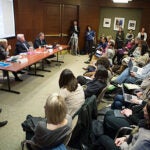 The idea of “The City as Canvas” is to bring art — what one might experience behind the doors of museums and cultural institutions — into public spaces.

On Friday, Loeb Fellow Helen Marriage led a conversation on that topic as part of the series “The Power of Cultural Disruption” at the Graduate School of Design. Jim Lasko, a Loeb Fellow and co-artistic director of Chicago’s Redmoon Theater Company, and Elizabeth Streb, a prominent choreographer, joined Marriage in the discussion.

Lasko said that his commitment to public space and the “narrow band of the public” who actually experience art in traditional venues have driven his work into everything from Chicago’s most crime-infested neighborhoods to the plaza and façade of the Museum of Contemporary Art.

Lasko said his work focuses on “incorporating the many into the experience of what art is” as “a mechanism for illuminating humanity in a public space.”

“Public space symbolizes how we understand our culture,” he said. Creating art in public space, he said, “induces people to have more liberty.”

Rather than comment on her art, Streb suggested playing a video of her work commissioned by the mayor of London for the Olympics last year. “Action speaks louder than words,” she said.

While planning the event, titled “One Extraordinary Day,” she became obsessed with “piercing the sky with the human form.” She succeeded in creating art in, on, and hanging from some of London’s most famous places, in a way “that people couldn’t look away from.”

The talk turned into a lively exchange between the presenters and the audience of about three dozen people, who asked about financing large-scale projects and navigating the bureaucracies of institutions and governments.

“As soon as you become involved in client services, the client sets the parameters,” said Lasko, joking that he is very good at waiting tables. “Part of the magic is that there is no sell,” he continued. “It’s a gift.”

“Debt” was one solution, said Streb, remembering the days when she was a struggling artist with a day job working in a restaurant.

When working with governments, trust and respect are vital, Marriage said. “You can change the world if you have that.”

When the topic turned to critics, Streb commented that she “got slammed for [her show at] Park Avenue Armory, but still sold 800 tickets.”

Streb also encouraged “class analysis” and said that it “would be a better world if everyone could walk through the doors [of a museum] and feel like frolicking,” no matter what they looked like.

“The Power of Cultural Disruption” explores how cultural events can transform public space. The next event, “The City as Forum,” will be held at the Graduate School of Design at 1:15 p.m. on March 15 in Room 124, with guest Justine Simons, head of culture at the mayor of London’s office.