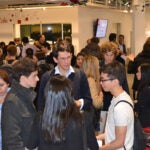 The Harvard Alumni Association (HAA) announced that Stephanie D. Wilson ’88, a NASA astronaut and engineer who flew three missions aboard the space shuttle Discovery, has been chosen by her classmates to serve as Harvard’s chief marshal for Commencement 2013.

Elected each year from the members of the 25th reunion class, the chief marshal represents a longstanding Harvard tradition. On Commencement Day (May 30), the honoree hosts the Chief Marshal’s Spread — a highly anticipated culinary event for dignitaries and guests — and leads the afternoon procession of alumni into Harvard Yard. The chief marshal also designates “marshal’s aids” to perform various duties as part of the HAA’s Committee for the Happy Observance of Commencement (“The Happy Committee”).

“It is an honor to be selected by my class to serve as chief marshal,” Wilson said. “I am very humbled to have been selected among such accomplished and talented candidates. In an era where inspiring and educating the next generation of young people is crucial, Harvard provides unique opportunities to excel in any chosen field. I look forward to serving as chief marshal for the 2013 Harvard Commencement and to ushering the next generation of leaders into the world.”

Wilson, the second African-American woman to travel into space, joins a notable group of alumni who have returned to Harvard as chief marshal. They include David Rockefeller ’36, LL.D. ’69, Fred Glimp ’50, Ph.D. ’64, Emily Mann ’74, and John Lithgow ’67, Art.D. ’05. A note in the 1892–93 Harvard Graduates’ Magazine indicates that the custom of chief marshal likely began in the 1880s following Harvard’s 250th anniversary celebrations. A little over a century later, in 1990, Ursula Oppens ’65 was named the first female chief marshal.

The position is a special honor among members of the 25th reunion class. Each year, it is filled by a person who has not only achieved success in his or her career but also contributed both to society at large and to the College.

Wilson was twice honored with the NASA Exceptional Service Medal and has three Space Flight Medals to her name. She also received the Harvard College Women’s Professional Achievement Award and the Harvard Foundation Scientist of the Year Award. She is a member of the American Institute of Aeronautics and Astronautics, the Association of Space Explorers, and the Society of Women Engineers.

Wilson has also been a member of the Harvard Board of Overseers since 2007. She said she has valued the opportunity to “reconnect with Harvard, to help Harvard remain true to its mission of providing excellent teaching and research, and to give back to a community that has given so much to me.”

“This answers the question, ‘What does one do with a liberal arts education?’ Literally and figuratively, fly to the moon,” said HAA President Carl F. Muller ’73, J.D. ’76, M.B.A. ’76. “Perhaps astronaut Wilson will start a Harvard Club in outer space.”

Harvard’s 362nd Commencement will be held on May 30. To reserve your tickets to the Alumni Spread Luncheon and the Annual Meeting of the Harvard Alumni Association (Afternoon Program), please visit annualmeeting.alumni.harvard.edu.