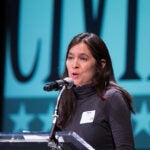 In recent years, a good deal of ink has been devoted to the idea that a vibrant arts scene makes a community a better place to live. Best-sellers such as Richard Florida’s “The Rise of the Creative Class” have argued that cities can thrive by attracting creative types. And Americans themselves, as repeated Gallup polls have found, say that the variety of social offerings — primarily arts and culture — is the most important factor in keeping them attached to the place they live.

But as many artists and cultural groups know all too well, public money hasn’t always followed public sentiment. With that in mind, the Hauser Center for Nonprofit Organizations is launching a multiyear project to analyze links among funding, participation, and the vitality of the arts in six U.S. urban centers, starting with Detroit and the San Francisco Bay area. The hope, its leaders say, is to use hard data to develop bold policies to support the arts at the local and national level.

In the United States, “the arts are treated as a public good and funded as a private good,” said Jim Bildner, a Hauser Center senior research fellow and an adjunct lecturer at Harvard Kennedy School (HKS), at a panel discussion launching the new Initiative for Sustainable Arts in America. “The arts community needs to recognize both realities. There may be some public support going forward, but we have to figure out where our audience is, and how to reach them in a cost-effective way.”

In launching the initiative, also known as SustainArts, the Hauser Center hopes “to have as broad a conversation as we can with as many stakeholders as possible,” Bildner said.

That ambition was echoed during Thursday’s event at HKS, “Are Arts Relevant in a 21st Century World?,” which drew an overflow crowd. If the makeup of the audience — equal parts students in the Graduate School of Education’s Arts in Education program and veterans of the local scene — was any indication, the issue has captured the attention of arts lovers across generations.

The arts have an important role to play in revitalizing communities, said Carol Coletta, president of ArtPlace, which in the past two years has awarded $29 million to 80 projects in 46 communities, from Anchorage, Alaska, to Little Rock, Ark., to Miami Beach, Fla. The foundation is primarily interested in how the arts make a community more diverse and vibrant; to that end, she said, ArtPlace gauges a project’s impact on a particular place by measuring its effect on factors like walkability and cellphone activity in the area.

A vibrant cultural scene won’t transform a community on its own, Coletta said, but the arts should be a part of a “portfolio of strategies” to transform communities. Increasingly, arts lovers don’t distinguish between nonprofit and for-profit cultural organizations, she added.

“People don’t make those distinctions when they’re thinking about what makes a great place,” she said. “In some cases they’re not making a distinction between the great coffee shop and the art gallery — it’s all part of the same thing.”

As America’s demographics change, it’s also important for arts organizations to broaden their ideas of how people engage with the arts, the panelists agreed.

Traditional Western arts such as opera and ballet may be losing out to technologically democratic art forms like photography and film, but that doesn’t mean communities can’t create targeted programs to draw patrons to the arts, whether through discounts for the opera or “random acts of culture” that bring art to the people. (The discussion paused at one point so the audience could watch a group of opera singers stage a moving rendition of an aria from “Carmen” in the shoe section of a department store in Miami’s Dadeland Mall.)

“If you can make [the arts] important enough to people, they will come,” said Dennis Scholl, vice president for the arts at the Knight Foundation, a nonprofit funding organization. “But you have to create an atmosphere where you can look around and say, ‘It’s not just me and blue-haired ladies.’ You have to create a scene.”

Also, “The idea of a national arts policy won’t originate from the Beltway,” Scholl said. “It’s going to originate from the grassroots communities that we all live in. It’s going to originate block by block, person by person, where people demand it. That’s only going to happen when arts organizations become parts of their community.” (As the speakers noted, the National Endowment for the Arts, the single largest federal funder of arts programs, has a relatively paltry budget of $146 million, a figure that has declined by more than 10 percent since 2010.)

Now may be exactly the right moment to address the need for stronger public arts policies, Scholl said. With the larger economy hurting municipal budgets, he said, mayors can no longer “throw money” at companies to keep employers and commerce in their cities. As a result, leaders are looking for cheaper, more creative solutions to help their communities thrive, like promoting a robust cultural scene.

“They’re starting to look for other ways to make a place where people want to be,” Scholl said. That may be more important than ever, he added, as recent studies have shown that Millennials decide where to live before they decide what kind of job they’re looking for.

Ultimately, what the country needs to ask itself, Scholl said, is whether it considers the arts a vital national interest.

The Hauser Center’s initiative aims to answer that question with a mix of data and advocacy. In each city it plans to study — the Detroit project is under way — SustainArts will draw on collaboration with a number of research partners and funders to map the local “arts ecology,” providing data visualization tools that will allow planners to see how people participate in the arts and what drives participation.

Detroit, for example, added a small tax last summer to fund its arts programming. Residents grumbled before the tax was passed, Bildner said, but attendance at the Detroit Institute of Arts has skyrocketed. It’s an example of the kind of incentives that organizations should be studying as they look for ways to make citizens feel like stakeholders in the arts.

“The arts and culture sector, by its nature, has many voices and lots of opinions about why things are the way they are, but there’s very little factual basis to ground that conversation,” Bildner said after the event. “We’re hopeful that we’ll give communities a basis of facts to influence how they respond to change, and that we’ll enable communities to take responsibility for their arts and culture organizations.”