A look inside the lab 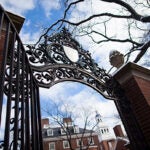 Anyone who’s ever wondered about the sort of cutting-edge research that takes place in Harvard’s labs will now have the chance to find out.

The Faculty of Arts and Sciences’ Division of Science recently relaunched a popular lecture series, aptly titled “Science Research Lecture Series,” which is aimed at introducing the broader community to research conducted by Harvard faculty. The talks will be held once a month in the Science Center, and will be open to the public.

“I am pleased that we have been able to resurrect this lecture series, thanks to the efforts of a group of faculty led by Melissa Franklin, Mallinckrodt Professor of Physics, as a way to highlight the exceptional work of Harvard faculty and students,” said Dean of Science and Mallinckrodt Professor of Geophysics Jeremy Bloxham. “These talks, geared toward a lay audience, make the cutting-edge research taking place in Harvard’s labs accessible to the general public, and represent an opportunity for both the Harvard and local communities to get informed about and excited by the groundbreaking work that takes place at Harvard on a daily basis.”

The series began last month with a talk by Jeff Lichtman, the Jeremy R. Knowles Professor of Molecular and Cellular Biology and Santiago Ramón y Cajal Professor of Arts and Sciences, who described his efforts to produce the “connectome” — a wiring diagram that shows how all the neurons in the brain are connected.

“There is a huge amount of interest in the brain right now,” Lichtman said. “So it’s worth considering why this might be a special organ system.”

Where other organs, like the kidney, liver, or lungs, have a clear relationship between their structure and their function, Lichtman explained that the same cannot be said of the brain.

“There are diseases of the brain, many of which are incurable not simply because they’re hard to cure, but because we have no idea what’s wrong,” he said. “We don’t know what’s wrong because the underpinning of the cellular structure of the brain is not well understood at all.”

To get a better understanding of that cellular structure, Lichtman and colleagues in 2007 developed a unique imaging system, dubbed Brainbow, that uses combinations of red, green, and blue fluorescent proteins to mark neurons with different colors, allowing researchers to trace the path of individual neurons and begin to form a wiring diagram of the brain.

Even that system, however, was no match for the brain’s complexity.

Using the system to label every neuron in the brain quickly became unfeasible, Lichtman said, because the sheer number of cells made it impossible to understand how they all connected.  The solution, developed by Lichtman, is an automated serial electron microscopy technique that allows researchers to capture high-resolution images of brain tissue, which can then be stitched together using computers to form a 3-D image of how various neurons are connected.

If researchers are able to overcome such obstacles, Lichtman said, the potential payoffs for science and medicine could be enormous. In addition to potentially uncovering clues to the treatment of a host of diseases, the results could shed new light on how the brain works to store information through learning and memory.

The next lecture of the series will be held tonight at 7 in the Science Center, and will feature Scott Edwards, the Alexander Agassiz Professor of Zoology in the Department of Organismic and Evolutionary Biology, and Curator of Ornithology in the Museum of Comparative Zoology at Harvard University, who will give a lecture titled “Birds: Evolution and Innovation in a Changing World.”