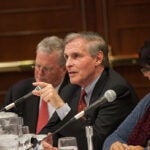 Hitting malaria from all sides

A team of scientists just won a battle in the war against antibiotic-resistant “superbugs” — and only time will tell whether their feat is akin to a bacterial Battle of Gettysburg that turns the tide toward victory.

They won this particular battle, or at least gained some critical intelligence, not by designing a new antibiotic, but by interfering with the metabolism of the bacterial “bugs” — E. coli in this case — and rendering them weaker in the face of existing antibiotics, as reported today in Nature Biotechnology.

It’s the “kick ’em when they’re down” style of fighting, and the team from Harvard’s Wyss Institute for Biologically Inspired Engineering and Boston University used sophisticated computer modeling and biotechnology as their weapons of choice.

“We are in critical need for novel strategies to boost our antibiotic arsenal,” said senior author and Wyss core faculty member Jim Collins, a pioneer of synthetic biology who is also the William F. Warren Distinguished Professor at Boston University, where he leads the Center for BioDynamics. “With precious few new antibiotics in the pipeline, we are finding new ways to harness and exploit certain aspects of bacterial physiology.”

In this case, the team targeted a little-understood but key part of bacterial metabolism called ROS production.

ROS, or “reactive oxygen species,” include molecules like superoxide and hydrogen peroxide that are natural byproducts of normal metabolic activity. Bacteria usually cope just fine with them, but too many can cause serious damage or even kill the cell. In fact, Collins’ team revealed a few years ago the true antibiotic modus operandi: they kill bacteria in part by ramping up ROS production.

The precise genetic mechanisms by which E. coli produces ROS remain elusive, Collins said, so his team adopted a standard computer model that maps out the way scientists currently understand E. coli metabolism. Collins’ team began by adding to this “system-level” metabolic model hundreds of reactions that are known to increase ROS production. Then they deleted various genes to see which were involved in ROS production, honed in on the suspected targets after running thousands of computer simulations, and validated the model in the laboratory — achieving 80 to 90 percent agreement with the model-based predictions.

“The next challenge was to determine if increasing the ROS production by the cell itself would render it more susceptible to death by oxidative, ergo, antibiotic attack,” Collins said — and it did.  The team deleted a series of genes that led to increased ROS production in the cell, they added different antibiotics and biocides such as bleach — known cell-killers by way of increasing ROS production — and the cells died at a much higher rate than the cells without the deleted genes. In short, by interfering with the bacterial metabolism, the antibiotics and biocides were even more lethal to the cells.

“There is no magic bullet for the global health crisis we’re experiencing in terms of antibiotic-resistant bacteria,” said Don Ingber, Wyss founding director, “and yet there is tremendous hope in the kinds of pioneering systems biology approaches Jim and his team are spearheading.”

The team’s next steps are to use molecular screening technologies to precisely identify molecules that boost ROS production, Collins said, and to test the approach used in this E. coli study on other kinds of bacteria — such as the mycobacteria responsible for tuberculosis, a potentially lethal lung disease.

This work was funded by the Wyss Institute for Biologically Inspired Engineering at Harvard University, the National Institutes of Health Director’s Pioneer Award Program, and the Howard Hughes Medical Institute.