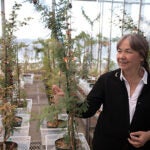 In January, when the Journal of the American Medical Association (JAMA) published a meta-analysis of 100 studies that probed the relationship between body mass index and mortality — studies that found slightly overweight people have lower all-cause mortality than normal weight and underweight people — media around the globe trumpeted the news.

Many suggested that scientists had failed to understand something crucial about health, and questioned whether carrying extra weight might be healthier than being slim.

“When I read the article I was somewhat taken aback. I wondered if I should send a ‘never mind’ note to all the people I’d taught about the risks of excess fat,” said Jeffrey S. Flier, dean of the Faculty of Medicine, at Harvard Medical School (HMS) and an authority on the biology of obesity and diabetes.

He wasn’t alone. Many others were perplexed by the findings gathered by Centers for Disease Control (CDC) epidemiologist Katharine Flegal, which contradict a preponderance of research indicating that there is a direct correlation between the risk of mortality and being overweight once factors such as lower weight from cigarette smoking, chronic disease, and wasting from frailty in the elderly are taken into account.

To clear up the confusion, Flier worked with Julio Frenk, dean of the Harvard School of Public Health (HSPH), to convene a panel of experts at HSPH on Feb. 20 to discuss the findings with the HMS and HSPH communities. Flegal, a senior scientist at the CDC’s National Center for Health Statistics, was invited to the event, but did not attend.

“We live in an era of near-ubiquitous access to information,” Frenk said, “but the University has an important role to play in providing context and analysis to help people judge the value of information they are consuming, especially when there are equivocal or controversial findings.”

The panelists evaluated Flegal’s findings and pointed out a number of methodological errors in the study that they said resulted in the artificial appearance of a protective benefit in being overweight or mildly obese.

“When something sounds too good to be true, it’s usually not true,” said Frank Hu, HSPH professor of nutrition and epidemiology and HMS professor of medicine.

The selection criteria that Flegal used for her meta-analysis ruled out high-quality studies of 6 million people (more than twice as many as were represented in her analysis), said Hu. These studies, in aggregate, show that the highest survival rates are in normal weight people, not the overweight, Hu said.

The studies that Flegal did use included many samples of people who were chronically ill, current smokers and elderly, according to Hu. These factors are associated with weight loss and increased mortality.

In other words, people are not dying because they are slim, he said. They are slim because they are dying—of cancer or old age, for example. By doing a meta-analysis of studies that did not properly control for this bias, Flegal amplified the error in the original studies.

There is also no known biological basis for any protective effect from being overweight, the panelists said, citing studies that show a clear connection between being overweight and conditions such as hypertension and insulin resistance, which are risk factors for coronary heart disease, stroke and several cancers.

“Even as you get near the upper reaches of the normal weight range, you begin to see increases in chronic diseases,” said JoAnn Manson, chief of the Division of Preventive Medicine, Brigham and Women’s Hospital, HMS Michael and Lee Bell Professor of Women’s Health, and HSPH professor of epidemiology. “It’s a clear gradient of increase. There is no evidence here of any global protective factor for being overweight.”

Flegal responded in an email to the criticisms by saying that she stands by her findings, which she noted had withstood review by the CDC, the National Institutes of Health and the editors and four of five reviewers at JAMA. She said that her team looked at 7,000 articles already in the medical literature.

“We explicitly included studies that were prospective studies of adults that looked at all-cause mortality with BMI measured or reported at baseline and that used the standard international categories of BMI … used by the World Health Organization and the U.S. government,” Flegal said.

Panelists, however, expressed concern that much of the popular journalism and commentary about Flegal’s research could undermine the credibility of science, citing articles that show studies wavering between alternating conclusions, and opinion pieces suggesting that researchers have some conspiratorial interest in making people feel bad about their weight or lifestyle choices.

Translating the nuances of these and other critically important findings to the public, practitioners and policy makers is part of the core mission of a university, Frenk said.

“The role of the university is not to shy away from controversy but to embrace it. Protecting the credibility of science becomes very important,” Frenk said.

Steven Heymsfield, the George A. Bray Jr. Endowed Super Chair in Nutrition and executive director of the Pennington Biomedical Research Center, who co-authored a JAMA editorial that accompanied Flegal’s findings, noted that BMI alone could not provide a definitive assessment of the health of any given individual.

He said, “Misleading data on BMI and mortality conveys an erroneous message to the public and practitioners that being overweight does not have major consequences.”

Walter Willett, the Fredrick John Stare Professor of Epidemiology and Nutrition and chair of the Department of Nutrition at HSPH, and HMS professor of medicine, said it is important for people to have correct information about the relationship between health and body weight.

“If you don’t have the right goal you are very unlikely to end up in the right place,” Willet said.

The panel was presented by the HSPH Department of Nutrition. This article first appeared on the Harvard Medical School news website on Feb. 22.