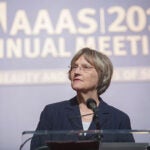 A clarion call for science

A Harvard researcher is pointing toward a new reason to worry about the effects of climate change — national security.

A new report co-authored by Michael McElroy, the Gilbert Butler Professor of Environmental Studies, and D. James Baker, a former administrator of the National Oceanic and Atmospheric Administration, connects global climate change, extreme weather, and national security. During the next decade, the report concludes, climate change could have wide-reaching effects on everything from food, water, and energy supplies to critical infrastructure and economic security.

“Over the last century, the trend has been toward urbanization — to concentrate people in smaller areas,” McElroy said. “We’ve built an infrastructure — whether it’s where we build our homes or where we put our roads and bridges — that fits with that trend. If the weather pattern suddenly changes in a serious way, it could create very large problems. Bridges may be in the wrong place, or sea walls may not be high enough.”

Possible effects on critical infrastructure, however, only scratch the surface of the security concerns.

On an international scale, the report points to recent events, such as flooding in Pakistan and sustained drought in eastern Africa, that may be tied to changing weather patterns. How the United States responds to such disasters — whether by delivering humanitarian aid or through technical support — could affect security.

“By recognizing the immediacy of these risks, the U.S. can enhance its own security and help other countries do a better job of preparing for and coping with near-term climate extremes,” Baker said.

The report suggests that climate changes could even have long-reaching political effects.

It’s possible, McElroy said, that climate changes may have contributed to the uprisings of the Arab Spring by causing a rise in food prices, or that the extended drought in northern Mexico has contributed to political instability and a rise in drug trafficking in the region.

“We don’t have definitive answers, but our report raises these questions, because what we are saying is that these conditions are likely to be more normal than they were in the past,” McElroy said. “There are also questions related to sea-level rise. The conventional wisdom is that sea level is rising by a small amount, but observations show it’s rising about twice as fast as the models suggested. Could it actually go up by a large amount in a short period? I don’t think you can rule that out.”

McElroy and Baker found that changes in weather patterns may already be under way.

“One novel thing we did was to do an analysis of just how unusual the recent weather has been, based on the longest historical database we have,” McElroy said. “The net conclusion is that weather is changing dramatically in specific regions, and the nature of the change is that we’re seeing more record high temperatures and many, many fewer low-temperature records.”

Other potential effects, McElroy said, are tied to changes in an atmospheric circulation pattern called the Hadley circulation, in which warm tropical air rises, resulting in tropical rains. As the air moves to higher latitudes, it descends, causing the now-dry air to heat up. Regions where the hot, dry air returns to the surface are typically dominated by desert.

The problem, he said, is that evidence shows those arid regions are expanding.

“The observational data suggest that the Hadley circulation has expanded by several degrees in latitude,” McElroy said. “That’s a big deal, because if you shift where deserts are by just a few degrees, you’re talking about moving the southwestern desert into the grain-producing region of the country, or moving the Sahara into southern Europe.”

The report is the result of the authors’ involvement with Medea, a group of scientists who support the U.S. government by examining declassified national security data useful for scientific inquiry. In recent decades, the group has worked with officials in the United States and Russia to declassify data on climatic conditions in the Arctic and thousands of spy satellite images. Those images have been used to study ancient settlement patterns in the Middle East and changes in Arctic ice.

“I would be reluctant to say that our report is the last word on short-term climate change,” McElroy said. “Climate change is a moving target. We’ve done an honest, useful assessment of the state of play today, but we will need more information and more hard work to get it right. One of the recommendations in our report is the need for a serious investment in measurement and observation. It’s really important to keep doing that, otherwise we’re going to be flying blind.”

“The bottom line is that our national security depends on our ability to sustain and augment our scientific and technical capacity to monitor unfolding events and forewarn of important changes,” Baker said. “The imminent increase in extreme events will affect water availability, energy use, food distribution, and critical infrastructure — all elements of both domestic and international security.”

The study was conducted with funds provided by the Central Intelligence Agency. Any opinions, findings, conclusions, or recommendations expressed in this material are those of the authors and do not necessarily reflect the view of the CIA or the U.S. government.