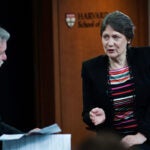 Adequate levels of vitamin D during young adulthood may reduce the risk of adult-onset type 1 diabetes by as much as 50 percent, according to researchers at the Harvard School of Public Health (HSPH). If confirmed in future studies, the findings could lead to a role for vitamin D supplementation in preventing this serious autoimmune disease in adults.

“It is surprising that a serious disease such as type 1 diabetes could perhaps be prevented by a simple and safe intervention,” said lead author Kassandra Munger, a research associate in the department of nutrition at HSPH.

The study, the strongest evidence to date suggesting that vitamin D could protect against type 1 diabetes, was published online on Feb. 3 and will appear in the March 1 print edition of the American Journal of Epidemiology.

In type 1 diabetes (once called juvenile-onset or insulin-dependent diabetes), the body’s immune system attacks and permanently disables insulin-making cells in the pancreas. About 5 percent of the estimated 25.8 million people in the United States with diabetes have type 1, according to the American Diabetes Association. Although it often starts in childhood, about 60 percent of type 1 diabetes cases occur after age 20.

While previous studies have suggested that vitamin D might play a role in type 1 diabetes, they principally focused on the link between a shortage of the vitamin during pregnancy or childhood and the risk of developing the disease during childhood. Other research, in young adults, found an association between high levels of vitamin D and a lowered risk of multiple sclerosis (an autoimmune disease genetically and epidemiologically related to type 1 diabetes), suggesting that inadequate vitamin D in adulthood may be an important risk factor for autoimmune diseases in general.

The researchers conducted a prospective case-control study of U.S. military personnel on active duty, using blood samples from the Department of Defense Serum Repository, which stores more than 40 million samples collected from 8 million servicemen and -women since the mid-1980s. Identifying 310 individuals diagnosed with type 1 diabetes between 1997 and 2009, the team compared blood samples taken before onset of the disease with samples of 613 people in a control group.

They found that white, non-Hispanic, healthy young adults with higher serum levels (more than 75 nanomoles per liter) of vitamin D had about half the risk of developing type 1 diabetes of those with the lowest levels of vitamin D (less than 75 nmol/L). Although the researchers found no significant association among Hispanics and blacks, the authors said this may be due to the small number of individuals in these groups.

“The risk of type 1 diabetes appears to be increased even at vitamin D levels that are commonly regarded as normal, suggesting that a substantial proportion of the population could benefit from increased vitamin D intake,” said Alberto Ascherio, professor of epidemiology and nutrition at HSPH, the study’s senior author.

An estimated 1 billion people worldwide have inadequate levels of vitamin D in their blood, and deficiencies can be found in all ethnicities and age groups. While sun exposure is an excellent source of vitamin D, sunscreen, clothing, skin pigmentation, and lower levels of ultraviolet radiation during winter months interfere with its production. Food tends to be a poor source of vitamin D, with “good” sources, such as salmon and fortified milk, containing 400 international units (IU) or less per serving; in the United States, the recommended daily allowance is 600-800 IU per day, according to the Mayo Clinic.

“Whereas it is premature to recommend universal use of vitamin D supplements for prevention of type 1 diabetes, the possibility that many cases could be prevented by supplementation with 1,000-4,000 IU/day, which is largely considered safe, is enticing,” the authors said.

The study was funded by a grant from the National Institute of Neurological Disorders and Stroke.