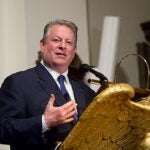 The sky as a ‘sewer’

Scholars are beginning to learn what’s working and what’s not when it comes to using new media to get people to do what you want, and a conference on “Behavioral Economics, Social Media, and Apps” at Harvard Law School on Wednesday brought together experts from academia and business to discuss it.

While the issues are complex, the psychology behind them is straightforward. Sendhil Mullainathan, former assistant director for research at the Consumer Financial Protection Bureau and now an economics professor at Harvard, said that businesses need to pay attention to the influence of advice (people are more affected by others than they realize); persuasion (people are more inclined to take a given action when others are doing the same); and, basically, laziness, what Mullainathan called “outsourcing self-help” to technological aids such as an alarm clock that forces dozers to rise to silence it.

“There’s a lot of technology that’s going to be coming down the pipeline that has to do with the outsourcing of self-help,” such as medicine bottles with “glow caps” that light up and make noise to remind patients to take their next doses. “I think of it as a passive-aggressive, needy friend,” Mullainathan said. If a bottle isn’t opened on schedule, “It will keep irritating you until you open it.”

Opower, a Virginia company that works with utilities to encourage customers to conserve energy, has been exploiting Mullainathan’s second tenet, the persuasive power of example, by using social media such as smart-grid engagement, mobile apps, and Facebook to show consumers how their energy use compares with their neighbors. Michael Sachse, vice president of regulatory affairs and general counsel, said the result has been a 2 percent energy reduction, “and 2 percent is more than you think.”

Customers don’t want an overflow of data about kilowatt hours — “it’s both boring and confusing, the magic quadrant,” Sachse said — “they want insight and analysis; they want someone to make it easy for them and tell them what to do.”

The medical community has gone Opower one better. Andy Cameron, an associate professor of surgery and surgical director of liver transplantation at Johns Hopkins University, partnered with Facebook to launch a tool that made it easy for Facebook users to sign up as organ donors, and then encourage their friends to do the same.

Cameron called organ donation rates a crisis that leaves thousands of people to die each year “for lack of a resource that we’re just not sharing.” With 117,000 people on the donor waitlist, “Eighteen is the number of people who will die today, Feb. 6, for lack of transplantable organs,” he said.

Enter “superhero Sheryl Sandberg,” Facebook’s chief executive officer, who envisioned an app to make it easy for users to register as donors. The company’s director of communications, Sarah Feinberg, said half a million people had used the tool, and with each registration a news story was created and sent to the donor’s friends, of whom the average Facebook user has 120.

The idea tapped most of Mullainathan’s psychological points. “It wasn’t Big Brother asking you for your organs, it was your friends. There was no draconian punishment if you didn’t do it, it was just a reminder,” Cameron said. “It also recognized social norms. It was an attempt to get people thinking: All my friends are doing this. It was also an emotional nudge. You got recognized as a good person for having done it.”

Registration leaped in the first two weeks of the app’s launch, with a huge increase on the first day, though David Laibson, the Robert I. Goldman Professor of Economics who served as moderator, pointed out that the spike tapered off and returned to baseline after two or three months.

Cameron agreed that “we didn’t cure the organ donation problem” but said he hopes to see the app transfer to mobile phone platforms and other social media — and half a million new donors is more than a good start.

“Facebook has taken a giant, huge step with this, and we’re really very grateful,” he said.