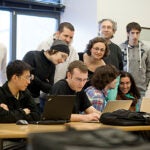 Doctors routinely track their patients’ hand-eye coordination to monitor any neuromuscular deficits, particularly as patients age or when they are injured — but the tests doctors have been using to track this kind of information may be subjective and qualitative.

In the study, 150 healthy people from the Boston area aged 21 to 95 used a stylus to follow a moving target around a circle on a computer tablet. As every person performed this tracing task, proprietary computer methods developed at the Wyss Institute measured their deviations from the circular path, which the researchers then analyzed as a function of age, sex, and handedness. Using this approach, a number can be obtained that can show differences in performance between various individuals or conditions.

“This new tool may hold great potential to augment existing protocols in a doctor’s neuromotor assessment toolbox,” said Wyss senior staff engineer Leia Stirling, who led the study. “It is portable, repeatable, quick to administer, and easy to perform.”

Whereas current methods to assess a patient’s neuromuscular function include subjective descriptions of a patient’s reflexes and cognitive status, the tracing tool could add a slew of new information displayed as a “score.” For example, doctors can record a “score” for “complexity,” which relates to how well a person can adapt to changes, and “motion fluidity,” which relates to how long the patient pauses during the task.  Older subjects involved in the study had lower complexity and motion fluidity scores.

“We have demonstrated in earlier studies that a loss of complexity is potentially associated with a range of human health issues from congestive heart failure and sleep apnea to aging,” said Wyss core faculty member Ary L. Goldberger, who is also the director of the Margret & H.A. Rey Institute for Nonlinear Dynamics in Medicine at BIDMC.

The technology — which the researchers informally called “NeuroAssess” — might one day be used on the playing field and in doctors’ offices worldwide.

“Just as your blood pressure is recorded during every visit,” Shirling said, “so could your neuromuscular score be tracked over time to determine progress through recovery and rehabilitation.”

Now that the baseline data have been collected from the healthy population of study subjects, the next goal is to determine NeuroAssess’ potential to become a quantitative assessment tool for groups of people with neuromuscular pathologies, such as those who suffered concussions or have multiple sclerosis.

The team is currently conducting a study with athletes in the Boston area to determine the sensitivity of the technology in diagnosing concussions.

“The interdisciplinary team who masterminded this new technology represent the best of the Wyss Institute model, which makes it possible for scientists, engineers, and clinicians who don’t traditionally work together to sit down, dream up game-changing technologies, and more easily and quickly translate them into products for high-value applications,” said Don Ingber, Wyss founding director.

The work was funded by the Wyss Institute, the National Institutes of Health, the G. Harold and Leila Y. Mathers Charitable Foundation, and the James S. McDonnell Foundation.

A team at Harvard’s Wyss Institute and Beth Israel Deaconess developed a computer tablet application that could rapidly and quantitatively assess neuromuscular performance. In the NeuroAssess trial, which also involved collaborators from Hebrew SeniorLife in Boston, participants were instructed to use a stylus to follow a moving target on the screen (as shown on the left). The right side of the video shows the performance of one participant, where the red line indicates a horizontal “unrolling” of the target’s circular trajectory — and the blue line indicates the distance from the line that is traced, to the target around the circle. The team developed a series of algorithms that take the data reflecting the distance from the line to compute an actual neuromuscular score for the tracing performance.