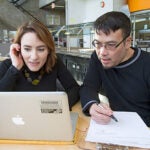 Technology to the classroom

Cass Sunstein, widely regarded as one of the most influential legal scholars of his generation, has been named a University Professor, Harvard’s highest honor for a faculty member.

One of the nation’s most-cited legal scholars, and one of the world’s most prolific, Sunstein is the author of hundreds of publications whose impact has extended beyond law into the social sciences and the public sphere in many nations.

“Cass Sunstein’s scholarly work has cast fresh light on long-standing questions and opened new paths for legal theorists, drawing creatively from fields outside the law to offer insights that consistently enrich not only legal discourse but the wider world of ideas,” Harvard President Drew Faust said. “He is a scholar, teacher, mentor, colleague, and public servant of uncommon range and distinction.”

The University Professorships were established in 1935 to recognize individuals whose work on the frontiers of knowledge crosses the traditional boundaries of academic disciplines.

Sunstein’s scholarship spans five major areas: behavioral economics and public policy, constitutional law and democratic theory, legal theory and jurisprudence, administrative law, and the regulation of risk. His appointment as the Robert Walmsley University Professor follows the retirement of legal scholar Frank Michelman, who held the chair from 1992 to 2012.

“I feel more honored than I can say,” Sunstein said. “Harvard has such a remarkable and energizing academic community, with the most extraordinary students and faculty in so many diverse fields. To be here is a privilege; I look forward to doing whatever I can to be worthy of this extraordinary honor.”

Sunstein is a magna cum laude graduate of both Harvard College (1975) and Harvard Law School (1978). He served as an editor of the Harvard Lampoon and a member of the varsity squash team, which won the national championship during his undergraduate years. As a law student, he served as executive editor of “Harvard Civil Rights-Civil Liberties Law Review” and was a member of the winning Ames Moot Court Competition team. He clerked for Judge Benjamin Kaplan of the Supreme Judicial Court of Massachusetts and Justice Thurgood Marshall of the Supreme Court of the United States before working as an attorney-adviser in the Justice Department’s Office of Legal Counsel.

In 2009, he accepted President Obama’s invitation, and was confirmed by the Senate, to serve as administrator of the White House Office of Information and Regulatory Affairs, which reviews draft federal regulations. In that time, he helped to implement the new health care law, promote the use of cost-benefit analysis, and initiate a number of major changes in national regulation, including a large-scale reassessment of existing rules. He was reappointed to the HLS faculty after leaving government in August 2012. He directs the new Program on Behavioral Economics and Public Policy.

Beyond his hundreds of academic articles, Sunstein has authored or co-authored more than 30 books, including the bestseller “Nudge” (with Richard Thaler), “Risk and Reason,” and “Republic.com.” His experience in government has influenced his book, forthcoming this April, “Simpler: The Future of Government,” and also the forthcoming “Conspiracy Theories and Other Dangerous Ideas,” both to be published by Simon & Schuster. His recent Storrs Lectures, “Behavioral Economics and Paternalism,” will be published in the Yale Law Journal this spring. His current projects include a book tentatively titled, “On Liberty Reloaded.”

Sunstein was elected to the American Law Institute in 1990, the American Academy of Arts and Sciences in 1992, and the American Philosophical Society in 2010. He was awarded the APS’s Henry M. Phillips Prize in recognition of his intellectual leadership in constitutional law and political science, including in particular, “his profound research and writing demonstrating the complex interplay between jurisprudential constructs and the day by day resolution of legal conflicts.”