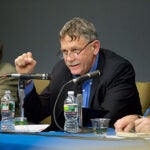 They can already stand, walk, wriggle under obstacles, and change colors. Now researchers are adding a new skill to the soft robot arsenal: jumping.

Using small explosions produced by a mix of methane and oxygen, researchers at Harvard have designed a soft robot that can leap as much as a foot in the air. That ability to jump could one day prove critical in allowing the robots to avoid obstacles during search and rescue operations. The research is described in a Feb. 6 paper in the international edition of Angewandte Chemie.

“Initially, our soft robot systems used pneumatic pressure to actuate,” said Robert Shepherd, first author of the paper, former postdoctoral researcher in the Whitesides Research Group at Harvard, and now an assistant professor at Cornell. “While that system worked, it was rather slow — it took on the order of a second. Using combustion, however, allows us to actuate the robots very fast. We were able to measure the speed of the robot’s jump at 4 meters per second.”

Just as with other soft robots, the three-legged jumping system begins life as a mold created by a 3-D printer. The robots are molded using soft silicone that allows them to stretch and flex.

Among the key design innovations that allowed the combustion system to work, Shepherd said, was the incorporation of a simple valve into each leg of the robot.

“We flow fuel and oxygen into the channels, and ignite it,” Shepherd said. “The heat expands the gas, causing the flap to close, pressurizing the channel and causing it to actuate. As the gas cools, the flap opens and we push the exhaust out by flowing more gas in. So we don’t need to use complex valve systems, all because we chose to mold a soft flap into the robot from the beginning.”

While the notion of using combustion to power a soft robot was enticing, it also came with a number of critical questions, not the least of which was whether the soft silicone used to create the robots would even survive.

“It’s a lot more powerful, but the question we had to answer was whether it was compatible — were the temperatures compatible — with this system,” Shepherd said. “What we were able to show is, because the duration of the explosion is so short, the energies absorbed by the robot are small enough to be compatible with soft robots. What’s more, the temperature of the robot increases by, on average, less than one kelvin.”

While he hopes to see internal combustion systems developed that can allow robots to walk or even run, Shepherd said jumping made sense as a starting point.

“Because it releases so much energy so fast, it made sense for jumping to be the first ‘gait’ we explored with this system,” he said. “The next step now is to learn how we can use this combustion system for other gaits, like running or even walking.”

A challenge in those cases, beyond programming the robot limbs to work in the proper order, will be developing a system to store the energy produced during combustion for later release.

“Right now, we use that energy immediately,” Shepherd said. “For walking, we may need to release that energy over a longer period of time.”

Although the system described in the paper is limited by tethers — tubes to deliver the combustible gases and wires to deliver the spark needed for ignition — the Whitesides group is working on one day freeing the robots from such limits.

“There’s nothing wrong with having tethered robots — many systems used in industry are tethered,” Shepherd said. “For some search and rescue applications, however, having an untethered robot will be necessary.”

“When we do develop those systems, it would be useful to have a power source that can deliver a high volumetric energy density for a long time, and burning hydrocarbon fuels is a proven way to do that,” he continued. “One of our goals for this paper was to show that we can use those fuels in soft systems, and I believe we’ve done that.”