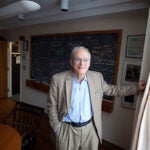 A graduate of the University of Michigan and a Hopwood Award winner, she was the author of two novels, “34 Charlton” and “Cornelia.” She served as the press officer for the United States Embassy in London after World War II. As a writer and editor, she worked at Life magazine, the Radcliffe Institute, and the Harvard Library Bulletin. From 1978 to 1985 she taught in Harvard College’s Expository Writing Program.

She was preceded in death by her husband, Douglas Wallace Bryant, director emeritus of Harvard University Library. She is survived by her daughter, Heather Corbally Bryant, and three grandchildren, Phoebe Elizabeth, Douglas William, and Walker Bryant Jordan, all of Pennsylvania. Contributions in her memory can be made to the Radcliffe Institute.

A memorial service will be held on Sunday, March 17, 2013 at 2 pm at the Harvard Memorial Church with a reception following at the Harvard Faculty Club. Burial will be private.