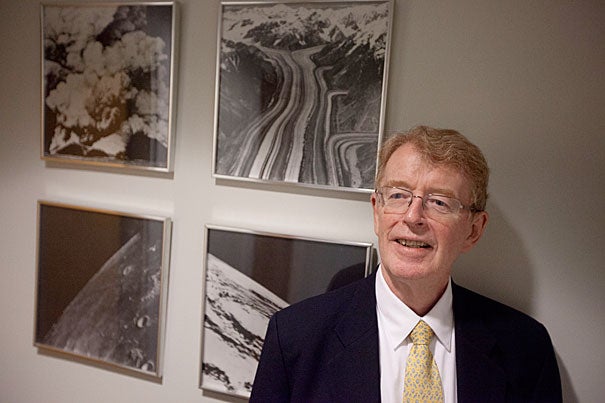 Daniel Gilbert, Harvard professor of psychology and best-selling author of “Stumbling on Happiness,” on Wednesday presented an impressive array of scientific research from economics, psychology, and neuroscience to assess his mother’s recipe for happiness.

“If your mom was like my mom, she gave you more advice than you probably wanted on how to be happy,” Gilbert said, before telling the capacity audience at the Peabody Museum of Archaeology and Ethnology that “mom was partially right” in suggesting three keys for happiness: marriage, money, and children.

With a photograph of his late mother on the screen behind him, Gilbert asked the audience members how many believed getting married led to happiness. He laughed when a woman in the fourth row pushed up the left arm of the man next to her. Smiling at the man with the forcibly raised arm, Gilbert nodded, “You’re right!” And so was mom,  he said.

“Married people are happier than unmarried people. They are healthier, live longer, have more sex,” and do better on nearly every indicator of happiness, Gilbert noted during his lecture titled “Happiness: What Your Mother Didn’t Tell You.”

Gilbert pointed out that the quality of a marriage is, unsurprisingly, closely connected to one’s level of happiness. On average, marriage “makes you happier for eight to 15 years,” making it a worthwhile “investment,” but happiness levels may diminish over time, Gilbert said. Of course, “staying in a bad marriage” makes people unhappy, he said, but people in bad marriages “get much happier after divorce.”

Gilbert then turned to money, describing how people typically deny a connection between money and happiness. Gilbert explained that he’d once conducted informal research at the Boston Common, asking people if money could buy happiness. Nearly all of them responded in “Hallmark card clichés” about how the important things in life are free. Gilbert offered the audience a Cheshire-cat smile before delivering his findings: “Of course money buys happiness,” he said. “A little money can buy you a lot of happiness, though a lot of money buys you only a little more happiness.”

The interplay of money and happiness is subject to diminishing marginal returns, noted Gilbert, who showed a graph revealing a correlation between the two increases at lower income levels and lower returns at higher levels. What’s the sweet spot where each dollar buys the most happiness? Gilbert cited a per capita income between $50,000 to $75,000.

He then suggested that people with higher incomes aren’t spending their money on the right things. Time spent resting, for example, the dream of so many working people, simply doesn’t deliver happiness. “People are happiest when the mind is engaged,” Gilbert said, whether talking, creating, or having sex (another point for marriage). “People are [also] happier when they give money away rather than spending it on themselves.”

Gilbert then discussed children, mom’s last ingredient for happiness. While people might refer to them as “bundles of joy,” said Gilbert (who has a son and grandchildren), “they’re not a source of happiness.” He displayed a bar graph showing that childless adults are much happier than parents. “Once people have kids, there’s a downturn in happiness,” he said, which isn’t reversed until the kids move out. “The only symptom of empty nest syndrome,” Gilbert said, chuckling, “is nonstop smiling.”

So why do people speak so joyously about their children? Gilbert likened having kids to watching a Red Sox-Yankees game where no run is scored until Sox slugger David Ortiz hits a game-winning homer in the ninth. “One will always remember that magical, momentary ending,” but forget the uneventful innings before. “That’s just like spending a day with a 5-year old,” he said, when an “I wub you” from the child may validate all the difficult hours.

“Of course we love our kids,” said Gilbert. “I never said don’t have kids,” but the scientific data is tough to refute. Mom’s advice on kids may thus leave something to be desired.

Gilbert concluded his good-natured deconstruction of mom’s happiness formula with a final word: “Maybe your mother doesn’t know everything about happiness, but call her anyway.” While our mothers never considered backing up their theories of happiness with scientific data, Gilbert put his mom’s recipe under a powerful microscope, offering insights, surprises, and plenty of thought-provoking science.