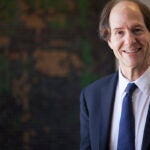 Harvard men’s basketball moved into sole possession of first place in the Ivy League after beating Princeton, 69-57, on Saturday, following a Friday night win over Penn, 73-54.

Kenyatta Smith made a Harvard-record 10 blocks and scored a career-best 20 points to go along with nine rebounds, while Wesley Saunders poured in 23 points, as the Harvard men’s basketball team topped Penn, 73-54, before a sold-out crowd of 2,195 Lavietes Pavilion Friday evening.

On Saturday, five players reached double figures in scoring, as the Harvard men’s basketball team moved into sole possession of first place in the Ivy League with a 69-57 win over Princeton before yet another sold-out crowd at Lavietes Pavilion. With the win, Christian Webster became Harvard’s winningest player, picking up his 85th career victory.

Up next, Harvard will head back on the road to visit Brown and Yale Feb. 22-23.

Harvard women’s basketball will play Brown at 7 p.m. Feb. 22, followed by Yale at 6 p.m. Feb. 23. Both conference games will be at Lavietes Pavilion.