In the Pink Zone 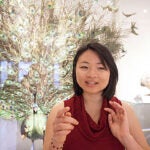 The power of penguins

Harvard’s Lavietes Pavilion was bedecked in a paler shade of crimson on Saturday for the Harvard-Yale women’s basketball game.

The evening included the Women’s Basketball Coaches Association Pink Zone event to raise awareness and support in the fight against breast cancer. Harvard President Drew Faust and Harvard’s women’s basketball coach Kathy Delaney-Smith, both breast cancer survivors, were on hand to honor all who had been affected by the disease.

Delaney-Smith was diagnosed with the breast cancer in December 1999. Shortly after her diagnosis, she decided to deal with her disease openly by taping public service announcements for television and participating in numerous Cancer Society events.

Now, 13 years later, Delaney-Smith took center court with Faust and presented her with a pink basketball signed by the 2012-2013 women’s basketball team in recognition of the sixth annual Pink Zone game.

“Kathy is fabulous, and this is a great team,” Faust said. “I’m a survivor and she’s a survivor, and I’m glad to be at an event to help eradicate a disease that has been challenging for so many women and families.”

As Delaney-Smith and Faust invited all those in the audience affected by breast cancer to stand and be acknowledged, the two women looked around and applauded them.

To cap off the evening, Harvard beat Yale 69-66. Visit gocrimson.com for more information.