Hitting malaria from all sides 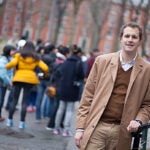 Death rates from malaria have fallen significantly over the last decade, but plenty of work remains, with hundreds of thousands of children still dying from the disease every year, experts said Wednesday in a discussion at Harvard Kennedy School.

The Harvard Malaria Forum gathered experts from the corporate and nonprofit sectors as well as academia to explore business approaches toward the goal of eliminating malaria deaths in the world.

Panelists discussed companies’ efforts to fight malaria among employees, manufacture bed nets, distribute nets along supply chains, and alert government officials, concerned about foreign exchange, to the impact the ailment has on workers.

International efforts over the last decade have paid off, reducing the malaria mortality rate from more than a million a year — where it stood for decades — to less than 700,000. Further, in places where malaria control measures are in place, mortality in children from all causes has fallen by half, panelists said, a reflection of the effect malaria has weakening children it doesn’t kill.

The event was co-sponsored by a long list of organizations, including HKS’s Mossavar-Rahmani Center for Business and Government and the Harvard Global Health Institute. It featured panelists and participants from Harvard, the United Nations, ExxonMobil Foundation, McKinsey & Company, Sumitomo Chemical America, and Reservoir Capital Group.

Ray Chambers, the U.N. Secretary-General’s Special Envoy for Malaria, updated a packed room at the Taubman Building on progress against the disease. More than $6 billion has been raised to fight the ailment and some 800 million people have been provided with insecticide-impregnated bed nets. Efforts have focused on nets as a relatively inexpensive intervention — malaria-carrying mosquitoes are active at night —as well as on providing medicine and indoor insecticidal spraying. It will take another $3.5 billion to achieve the goal of zero malaria deaths by 2015, Chambers said.

Chambers counted as a victory the increased awareness of malaria as a global issue, saying that more than 50 percent of the American public views the disease as a problem, compared with just 21 percent six years ago.

“We really need you and your cutting-edge ideas, because I think we’ve only scratched the surface of what can happen,” he told the audience.

Panelists from the business community highlighted actions by companies working in malaria-endemic areas. Suzanne McCarron, president of the ExxonMobil Foundation, said the company started a $100 million anti-malaria program. ExxonMobil can’t replace government action, but it does share its experiences of malaria’s economic impact with government leaders, she said.

Chambers said he believed the effort may soon transition from one driven by international donors to one increasingly driven by local demand. He believes that families will soon begin to buy bed nets on their own, convinced of their effectiveness. African leaders recently met to discuss how to continue efforts in their own countries, through taxes on airline tickets, financial transactions, and natural resources. With African economies beginning to grow, Chambers expects dependence on international donors to lessen over the next decade.

Naohiro Takahashi, president of Sumitomo Chemical America, described the company’s development of a bed net factory in Tanzania, which began as part of Sumitomo’s desire to give back to those in need. The factory now produces about 30 percent of the world’s bed nets, employing 7,000 people to make 30 million nets each year.

Though progress against the disease so far is encouraging, panelists warned about the danger of complacency. The world has stood in a similar place before, with an effective insecticide, DDT, and a new treatment drug, chloroquine, only to squander the gains, said Dyann Wirth, Strong Professor of Infectious Diseases at the Harvard School of Public Health and director of the Harvard Malaria Initiative.

Drug resistance is a concern, Wirth said. A drug-resistant form of the malaria parasite has emerged in Southeast Asia, though it has so far not made the jump to Africa. Still, she said, a malaria-carrying mosquito can bite multiple people, and a single case can lead to as many as 100 secondary cases, meaning the disease can spread rapidly if neglected. Gains need to be solidified or outbreaks can erase progress. That means continued research into new drugs and insecticides is critical, Wirth said.

“This is a potentially explosive disease,” Wirth said.