Faith not in God, but in humanity 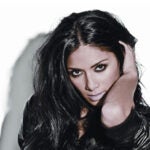 Nicole Scherzinger Artist of the Year

Izzard puts his money on the people ‘who turn up’

“There’s an E missing!” he said, grinning wolfishly, of the award presented by the Humanist Community at Harvard, the American Humanist Association,  and the Harvard Community of Humanists, Atheists, and Agnostics as part of Atheist Coming Out Week. “That’s all right, though — if we were religious, everything would have to be perfect, but we’re real people. So I actually prefer this. It’s like a first edition: When it’s got a mistake in it, it’s more impressive.”

Famous for his transvestism – “I’m 100 percent boy, plus extra girl” — Izzard delivered his acceptance speech sporting black heels, eyeliner, and colorful nail polish you could see from the balcony. Izzard’s speech mirrored his surreal and whimsical comedy routines, with commentary ranging from the serious — he declared his interest in running for mayor of London in 2020, which prompted the loudest applause of the night — to the irreverent, such as the “messiness” of human sacrifice.

Izzard said his atheism stems, in part, from the fact that God never “turns up.” He seamlessly morphed into a reporter covering a natural disaster: No deity in sight.

In contrast, Doctors Without Borders, he pointed out later, will get just about anywhere to lend a hand.

“No God has ever, ever turned up,” Izzard said. “It’s just us; it’s always been us. If a God does turn up, I’ll eat my words, but until then! … But when there is a disaster, we turn up. We do. We rely on each other.

“And think about it — should we be following anything that needs this much praise?” he added. “You never vote for anyone who says, ‘Vote for me and I will lead you! But before I lead you, I will need more praise! Start now, and then I’ll kick into gear, then I’ll lead you.’ No! You want a leader that says, ‘You know me, I know you, one for all, all for one, let’s go for it.’ That’s what we want, isn’t it?”

Drawing from current events and history, Izzard ruminated on Pope Benedict XVI’s recent resignation and marveled at Pope Pius IX’s defining infallibility as dogma in the 19thcentury — “which is amazing!” Izzard said in a high-pitched stage whisper, eliciting cheers from the crowd. He noted that after declaring himself infallible, Pius didn’t follow up with concrete action like editing the Bible “to get rid of all this slavery stuff. Interesting, that.”

Izzard declared a deep reverence for Monty Python, the British surreal comedy group, and belief in one other thing: the Golden Rule. “Do unto others as you would have others do unto you,” he said. “It’s in every single religion. That’s the only thing you need. You don’t need to do anything else.”

Izzard also encouraged the crowd to use scientific advances, such as mapping the human genome, to confront prejudice. His most recent project, a BBC series titled “Meet the Izzards,” used Izzard’s own DNA to trace his ancestry back 200,000 years.

“The cost for running your genome is coming down, so I encourage you to get it done, because it kills racism,” Izzard said. “We’re related, we’re all the same family, from just 10,000 years back. Plus, as soon as space aliens invade, then suddenly all of us will be getting along.”

Izzard thanked the humanist community for the award – “especially the misspellings, they’re fun” — and received a two-minute standing ovation from the audience. In closing, he urged his listeners to believe in humanity, and help out.

“There are seven billion of us, and most of us are trying to do good things,” he said. “One person can do a lot of damage and can cause a lot of death, as we unfortunately often see here in America, but it’s all the others that I’m talking about. There’s something about that melting pot that encourages us to live and let live. There’s an empathy gene, and most of us have it, and I want to encourage that.”