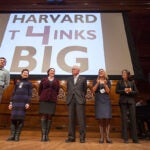 James W. Breyer, a leading venture capitalist known for his expertise in innovative technology and media, will join the President and Fellows of Harvard College (the Harvard Corporation) as of July 1, 2013, the University announced today.

A 1987 graduate of Harvard Business School, Breyer is a partner at Accel Partners, a venture capital firm with offices in Palo Alto, New York, London, China, and India.

In accordance with Harvard’s charter, Breyer was elected Sunday by the President and Fellows with the consent of the Board of Overseers. His arrival will bring the Corporation to 13 members, fulfilling the expansion plan central to the governance reforms adopted by the governing boards in December 2010.

“Jim Breyer is one of his generation’s most creative and admired venture capitalists,” said President Drew Faust and Robert D. Reischauer, the Corporation’s senior fellow, in announcing Breyer’s election.  “He combines wide experience in new technology and media with an expansive international outlook and an extraordinary capacity for catalyzing innovation and entrepreneurship.  He has been an actively engaged alumnus, most recently as a founding member of our Global Advisory Council. Beyond his professional pursuits, he has a deep commitment to the liberal arts, an imaginative perspective on the potential of technology to enhance education, and strong interests in modern and contemporary art, music, film, and photography. We very much look forward to welcoming him to the Corporation.”

“I’m honored by this opportunity to serve a university that blends tradition and innovation in such meaningful, powerful ways,” said Breyer. “The faculty, students, and staff who come together at Harvard are an extraordinary source of imagination and energy, and I’m excited at the prospect of working with Drew Faust and my future Corporation colleagues to help cultivate the spirit of curiosity and aspiration that, for me, defines Harvard.”

Besides his role as a managing partner at Accel Partners, Breyer is president of Accel Management Company, which serves as investment adviser to Accel Partners, and founder and CEO of Breyer Capital, an investment firm that focuses on global high-impact investing in the for-profit and social entrepreneurship sectors.

At Accel, Breyer has been an investor in more than 30 consumer, media, and technology companies that have completed public offerings or mergers.  He is former chairman of the National Venture Capital Association and past president of the Western Association of Venture Capitalists. Forbes magazine ranked him first on its list of top technology investors in both 2011 and 2012; Fortune named him both the smartest investor in technology and one of the 10 smartest people in technology in 2010; and he received the Silicon Valley Forum’s Visionary Award in 2012.

A Baker Scholar as a student at Harvard Business School, where he received his M.B.A. in 1987, Breyer is past chair of the advisory council of the HBS California Research Center and was a featured speaker on technology during the HBS global summit marking the School’s centennial in 2008.  He is a member of the University’s new Global Advisory Council and has informally advised the University on aspects of edX, the new platform for online learning.

Breyer led Accel’s 2005 investment in Facebook, where he continues to serve on the board of directors.  He has been a director of Dell Inc., the computer technology company, since 2009, and since October 2011 has served on the board of News Corporation, where his focus is on the 20th Century Fox film studios and digital entertainment strategies.  He was a director of Cambridge-based Brightcove, a leader in the online video platform industry, from its founding in 2005 until January 2013, and is expected to conclude his term on the board of Wal-Mart Stores, Inc., in June 2013.  Previously, he was founding chairman of the strategic planning committee of Marvel Entertainment, where he served on the board until its acquisition by Disney in 2009, and a director of RealNetworks, Inc., from 1995 to 2008.  He is also currently the lead or co-lead investor/director in several privately held companies including Etsy (social commerce) and Legendary Pictures (motion picture production).

Breyer received his bachelor of science degree in interdisciplinary studies from Stanford in 1983.  He studied in Florence, Italy, as a junior and remains involved with what is now Stanford’s Breyer Center for Overseas Studies in Florence.  He has also chaired the Stanford Engineering Venture Fund and been a founding advisory board member of Epicenter, the National Center for Engineering Pathways to Innovation.

His other nonprofit engagements include service as a trustee of the San Francisco Museum of Modern Art and of Menlo School, an independent school for students in grades 6 through 12; as a founding advisory board member of Pacific Community Ventures, which seeks to create economic opportunity in low-income communities; and as a member of TechNet, a network of CEOs that promotes innovation-driven U.S. competitiveness.

Early in his career, Breyer held positions at McKinsey & Company, Apple Inc., and Hewlett-Packard.  He joined Accel Partners in 1987, was named partner in 1990, and became a managing partner in 1995.

Breyer’s interests include contemporary and modern art, photography, film, and music.  His philanthropy supports numerous educational and environmental initiatives.  In 2005, he was named an honorary professor at the 1,000-year-old Yuelu Academy, Hunan University, China.