Birth of an actor 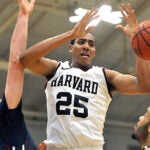 At Sunday night’s Academy Awards, Harvard graduate Tommy Lee Jones ’69 is in the running as best supporting actor for his role as firebrand abolitionist Senator Thaddeus Stevens in Steven Spielberg’s epic “Lincoln.” A veteran of more than 50 films and 1993’s winner of the same award, the longtime Texan was last year’s recipient of the Harvard Arts Medal. During this interview conducted while on campus, Jones discusses his first glimpse of the foreign turf of New England, and a hard choice he had to make on arriving: Should he focus on football or acting?