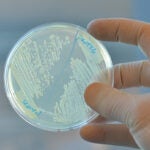 The return of the American robin to back yards across the country is a lovely sign of coming spring. But the little songbird with the orange-red breast and bright blue eggs has some not-so-lovely relatives: the crocodile and the alligator.

The connection was made during a riveting lecture, “What Art Thou, Little Bird? Developmental Mechanisms for the Origin and Evolution of Birds” by Arkhat Abzhanov, associate professor of organismic and evolutionary biology, on Jan. 31 at the Harvard Museum of Natural History’s Geological Lecture Hall.

The talk, introduced by Jane Pickering, executive director of the Harvard Museums of Science and Culture, kicked off the five-part series “Evolution Matters,” made possible by a gift from Drs. Herman and Joan Suit.

Abzhanov is an expert in cranio-facial evolutionary development, and a pioneer in the field of evolutionary developmental biology (“evo-devo”). He’s been interested in birds since childhood, and Nature named his work on beak development one of the top evolutionary discoveries of the last decade. Abzhanov began his talk by pointing out that humans have long observed and portrayed birds in everything from prehistoric cave paintings to religions, fairy tales, and computer games.

But what makes a bird?

Abzhanov said birds’ feathers evolved from scales, and their wings evolved from the five-fingered hands and agile wrists of early reptiles. Birds’ beaks are used variously — to catch fish, shrimp, and bugs; to crack open nuts; to make nests — with shapes and sizes that depend on the bird, and its evolution.

Beaks, along with wings and the ability to fly, Abzhanov said, make birds extremely successful and diverse. There are 29 orders and 10,000 species, making it the largest group of land vertebrates.

In Abzhanov’s research, after identifying the molecules that control the shape the beak takes (long and good for drinking nectar, for example, or short and strong and good for cracking nuts), using the chicken embryo, he successfully made molecular changes that forced the expression of particular genes. Through that manipulation, Abzhanov was able to make a chicken’s beak grow much bigger.

“When and how the molecules are used determine the bird,” he explained.

Abzhanov showed a slide with an image of an alligator embryo, which looked strikingly similar to the image of a chicken embryo next to it.

And while it’s been 75 million years since birds lost their teeth, to this day mutant chickens will grow teeth — teeth that bear a close resemblance to their ancient and remarkably close relative, the alligator.

Abzhanov noted that fossils tell of some birdlike dinosaurs with plumage that didn’t fly; the Tyrannosaurus rex, he said, probably had big fluffy feathers as a juvenile. And as the audience gasped, chuckled, and murmured over the idea, the lecture ended.

“Evolution Matters” continues at the Harvard Museum of Natural History at 6 p.m. Feb. 12 with “Looking for Signs of Evolution: Bees, Butterflies, and Bacteria.”