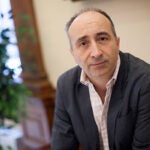 Exhibit shows how crime was portrayed in early media

It might not seem that the live helicopter feed of Los Angeles police cruisers trailing O.J. Simpson’s white Bronco has much in common with the Sacco and Vanzetti murder trial. But a new exhibit at the Harvard Law School (HLS) Library shows that America’s appetite for tawdry and salacious crime reporting existed long before “Dateline NBC” ever did.

“Extra! Extra! Read All About It: A Tale of True Crime” explores the exploitative history of crime and the American media, a relationship that began in the mid-1800s when a public fascination with true crime emerged, largely stemming from the popularization of serialized crime literature in the penny press. Curated by Lesley Schoenfeld, coordinator of public services and visual collections, the exhibit showcases this literature, published in both newspapers and books around the country, as well as the media’s depictions of three prominent historical crimes: Massachusetts’ child serial killer Jesse Pomeroy, the Lindbergh kidnapping, and the trial of Sacco and Vanzetti.

“I knew I wanted to curate an exhibit on crime,” said Schoenfeld, who turned to the library’s historical and special collections to create the compact but compelling exhibit housed in two exhibit cases in the Library’s Caspersen Room. “I remembered this scholar who came to the library to research Sacco and Vanzetti last summer, and I contacted her to see if she would be willing to help out with the exhibit and expand on some of the research.”

That scholar was Michele Fazio, an assistant professor of English at the University of North Carolina at Pembroke, whose research was concerned with the media’s portrayal of family in the Sacco and Vanzetti case. The press’s fascination centered, unsurprisingly, on the breakup of the Sacco household. Photographs of Nicola Sacco’s wife, Rosina, and their children served as both a gut-wrenching reminder of crime’s repercussions and a manipulative means to sell newspapers.

In one photograph, Rosina walks, head slightly bowed, out from the courthouse. That was the authentic version — but a second, doctored photo made its way out into the media frenzy. Captioned “the end of the road,” the composite image was meant to show Rosina leaving the Charlestown prison, presumably after an emotional visit with her husband.

Other exhibit items include records from the Wood Detective Agency, New England’s first private detective firm, which follow proprietor and former Boston detective James R. Wood’s recollections of his dealings with Pomeroy. Juxtaposed with his own account are subsequent recountings of the crime from an 1892 book and a 1930s Boston newspaper.

“When you work with such an amazing collection, it can be hard to know what to highlight,” said Schoenfeld. “Based on the response we have been getting, I think this is a topic that speaks to a lot of people’s interests, and I am really grateful for the opportunity it gave me to work with one of our researchers.”

“True Crime” is on view through April 26.