A Web browser in the heavens 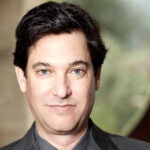 Members of the Allston-Brighton and Harvard communities gathered at the Harvard Allston Education Portal (Ed Portal) on Thursday for an illuminating evening of revealing astronomy and scientific enthusiasm.

Harvard professor of astronomy Alyssa Goodman arrived early to set up her presentation of the free WorldWide Telescope (WWT) from Microsoft Research. Goodman had helped to develop the telescope, which she likened to a Web browser for the sky.

Fifteen minutes before the first Faculty Speaker Series event of the year, Goodman invited 7-year-old Annika Hedlund and her 5-year-old brother Luke to “control the universe with your body” by using the WWT’s Kinect control feature, which allows users to shift objects via body motions. As Annika waved both arms, a display filled with countless stars that shifted position along with her. She eagerly asked Goodman, “Where’s the Milky Way?” The astronomer pointed, “Here!”

As the starting time neared, the Ed Portal staff brought in additional chairs, and even two couches, to accommodate the overflow crowd. Robert Lue, faculty director for the Ed Portal, professor of the practice of molecular and cellular biology, and faculty director of HarvardX, introduced Goodman as “one of the stars in the firmament of Harvard,” highlighting her efforts “to bridge science and community outreach, to get all kinds of people excited about science.”

Goodman started by showing a cluster of stars on a large screen, then used the WWT to zoom in on specific stars, explaining how the image led to related links such as scholarly articles and videos.  “You can access what the sky looks like at different wavelengths,” and in multiple dimensions, she said. Minutes into the presentation, 12-year-old Luke Black, sitting in the front row to the right of his mother, raised his hand and asked Goodman how she could display a Microsoft Windows program on her Apple laptop. Goodman reassured Black that this was indeed possible, then smoothly transitioned to a historical overview of 3,500 years of astronomy.

She discussed Galileo’s use of a primitive telescope to observe planets in 1610 and later referred to the first use of a radio telescope in 1937, calling this a gap “of about 300 years.” Black’s right arm launched upward again, asking if the professor had her calculation precisely right. Goodman, who teaches a Harvard course called “The Art of Numbers,” lightheartedly amended her “about 300 years” to “about 300-ish years,” which seemed to satisfy the attentive youngster.

Goodman next used the WWT and a video to describe how Galileo had revolutionized astronomy by observing the moons of Jupiter and using the findings to theorize that the Earth revolved around the sun, not vice versa. Using Galileo’s own texts and the WWT, Goodman zoomed in and showed the audience exactly what Galileo had seen in the night sky.

Goodman displayed data showing how much more engagement schoolchildren have with astronomy after using the WWT, as opposed to textbook-based instruction. She quoted one impressed middle-school boy who said the WWT “is even cooler than ‘Call of Duty,’” the best-selling video game.

When the question-and-answer session began, Black’s right arm was predictably the first to lift skyward (he asked about the WWT’s zoom function).

Afterward, Goodman and Lue reflected on the two-hour-plus evening.

“The real idea of the Ed Portal,” Lue said, “is to share the passion, knowledge, and enthusiasm of Harvard faculty and students with the Allston-Brighton community.” He said the speaker series has attracted “a very engaged, diverse audience of different ages. The questions and interactions are even more varied than what you might see in a Harvard classroom, which makes for a particularly engaging experience all around.”

Goodman, packing up her equipment, wholeheartedly agreed: “I didn’t expect so many kids tonight,” she said, but “I’m so grateful people brought them. The kids were so engaged.” She smiled and added, “Not one of them fell asleep.”