A learner’s guide to the universe 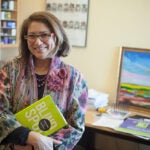 Peering into our blind spots

Astronomer Loeb homes in on ‘cosmic roots’ in textbook

Theoretical astrophysicist Avi Loeb has a pretty good idea about how the universe’s first galaxies formed, but he can’t wait to see if his theories are right.

Loeb, chair of the Harvard Astronomy Department and the Frank B. Baird Jr. Professor of Science, said a new wave of telescopes expected to come online over the next decade will allow astronomers to look deeper into the universe — and thus farther back in time — than ever before.

That new data will test theories about how early stars and galaxies formed, Loeb said. And, he added, it won’t be the worst thing in the world if some of his own theories are proven wrong.

“I would be excited if that happens because it means we will have learned something new,” Loeb said. “Human imagination is limited and nature is full of surprises, so we should keep an open mind.”

Loeb is helping prepare the next generation of astronomers to interpret the coming flood of data with a new textbook, “The First Galaxies in the Universe,” introduced this month during an event at the Harvard-Smithsonian Center for Astrophysics (CfA). The book, written with Steven Furlanetto, a former Loeb grad student now at the University of California, Los Angeles, is a more technical follow-up to Loeb’s 2010 book, “How Did the First Stars and Galaxies Form?,” which just won the 2013 Chambliss Astronomical Writing Award from the American Astronomical Society.

“The next decade is likely to bring a flood of data,” said Loeb, who is also the director of the CfA’s Institute for Theory and Computation.

When Loeb arrived at Harvard in 1993, he was one of just a few people in the world thinking about the first stars. The field has since grown and matured, and was recently listed among astronomers’ top research priorities for the next decade.

“I started various aspects of this field from scratch,” Loeb said. “Generally speaking, it’s dealing with our cosmic roots.”

In an interview in his CfA office, Loeb described current thinking about the earliest stars and galaxies. The Big Bang got it all started some 13.7 billion years ago — an explosion of inconceivable violence resulting in a dense, opaque, high-energy soup too hot even for basic atoms to form. After about 400 thousand years, the rapidly expanding universe cooled enough that atoms — mainly hydrogen, the simplest atom — could form.

This early universe was almost but not completely uniform. There were tiny variations in density that allowed gravity to pull particles together until they assembled into a sufficiently compact cloud, ignited, and formed the first stars, much more massive and short-lived than our own sun. Galaxies came next, forming as the stars glowed within massive gas clouds.

The several generations of stars since created the heavier elements needed to build Earth — and human beings.

With today’s telescopes, astronomers can map just a small fraction of the universe, Loeb said. New projects like the successor to the Hubble Space Telescope, the James Webb Space Telescope, and giant ground-based instruments, like the Giant Magellan Telescope (being built in a mountaintop in Chile), will allow astronomers to see much farther away and further back in time than ever before.

“To understand it, we have to go back in time,” Loeb said. “The farther we look, the earlier are the images we can see.”

Loeb said the second edition of the book will either be largely the same as the first, meaning current theories were validated by upcoming observations, or need revision. He hopes it needs at least some revision. It would be a boring universe, Loeb said, if all of today’s theories are true.