A league of her own 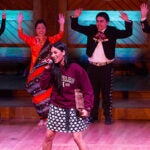 With Harvard on hold, Christina Gao is skating to the top

Christina Gao wanted one thing, and one thing only: McDonald’s.

It was the evening after the Four Continents competition in Japan, and the Harvard College freshman, who has been racing toward the top of the figure skating world, needed her fast-food fix — a salty counterpoint to the discipline, travel, and sacrifice a career in athletics demands, a career that recently led Gao to make the difficult decision to take a yearlong leave from Harvard to dedicate herself to Olympic training.

Gao placed fourth in the Four Continents competition, and got her reward in the form of a Big Mac. She then boarded a plane back to Boston, where she’s continuing her training, and where the busy Harvard world is just a train ride away.

“It wasn’t an easy decision,” said Gao, who also recently placed fifth at the nationals. “I wasn’t able to work out my courses to fit my schedule, and so I decided to take this year to train. Harvard will always be here for me, but the chance to try for the Olympics doesn’t happen very often.”

Raised in Cincinnati, Gao began skating when she was 7. “It began as just an after-school activity,” she recalled, “but started growing into more than that, and soon I was training three or four hours a day.”

As a high schooler, Gao uprooted to Toronto, where she could focus on training, taking courses through online correspondence, and traveling to 11 countries over the past few years while competing with Team USA.

When she visited Harvard to skate in An Evening With Champions, “I knew this was where I wanted to be,” she giddily confessed.

Gao’s down-to-earth personality could be attributed to her Midwestern roots. She offers no pretense about her concentration of choice: “I have no clue,” she said. “There are so many neat things to dive into and I’m excited to have the opportunity to discover what I’m passionate about.”

But Gao is passionate about skating, its peaks and pitfalls. “It’s really hard most of the time. I’m always tired and sore, and sometimes I don’t think I can handle it. But in the end, I always seem to push through, I think because I truly love it,” she said.

“I’ve had an amazing time at Harvard so far. I had to balance skating and school, which was hard at first, but very rewarding. I found a nice balance between the two. School kept my mind sharp, while skating kept me physically sharp. I’d train three hours in the morning, go to class, and then go back to the rink for another hour of training. It was definitely tough, and sometimes I wanted to give up, but I’m glad I pushed through.”

As Gao moves forward with the 2014 Olympics in mind, she’ll be contending not just with competitors, but herself. “I get really nervous when I compete,” Gao said.

To counter that, like many athletes, she has some superstitious practices (though fewer, she said, than she used to): “I always put my left skate on first, and I usually try to take a nap before I compete.”

Another necessary ritual? McDonald’s, of course — post-competition, at the airport, before the flight home.

So far, it all seems to be working. Gao garnered a silver medal at Skate America in 2012, and that year placed fifth in the U.S. Figure Skating Championships.

If it ain’t broke, why fix it?