A clarion call for science 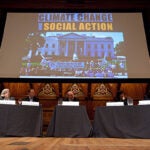 A groundswell on climate change

Harvard President Drew Faust called for members of the scientific community to “raise our voices” in an effort to prevent the U.S. Congress from becoming “an American Association for the Retreat of Science,” when she addressed a gathering of educators, engineers, science leaders, and policymakers in Boston on Thursday.

Faust delivered her remarks during the annual meeting of the American Association for the Advancement of Science (AAAS), the world’s largest and one of its most influential organizations devoted to advancing science, engineering, and innovation.

“We must secure the federal research support critical to the future of our nation and of the world,” said Faust, one of the co-chairs of this year’s AAAS meeting on the theme of “The Beauty and Benefits of Science.”

Faust’s remarks came as the nation braces for the impact of looming sequestration, a sequence of drastic federal budget cuts that are scheduled to take effect at the beginning of March unless Congress acts to avert them.

According to AAAS President William H. Press, sequestration would dramatically affect every field of scientific research. “If the sequester kicks in on March 1, there’s immediately going to be $54 billion over five years in cuts to federal support of science,” said Press. “If the sequester is avoided … it’s important that we make the case that science should be on the investment side of the ledger.”

In her remarks, Faust harkened back to the first Boston meeting of the AAAS in 1880. Then, American astronomer Asaph Hall, who began his research career at the Harvard College Observatory and went on to discover the moons of Mars, told the crowd that he was often asked, “Of what use is astronomy?” Faust said that, to Hall, astronomy and science in general were vital to “the tradition of breaking paths and of seeking truth.”

Recent genomic and computational revolutions, along with key findings in other fields, “make this an age that rivals the 17th century’s scientific revolution in its promise for new understanding and human betterment,” said Faust. “It would be worse than a tragedy to waste this moment full of promise, to leave answerable questions unanswered. It is all of our responsibility to ensure that this does not happen.”

Highlighting the potential impact of sequestration,  Menino said that people’s health, as well Boston’s center as an innovation hub, could be threatened if Congress fails to act.

“The research these scientists do is mind-blowing, and the idea that Congress could slash their funding next month is mind-boggling,” said Menino. “The doctors who have joined us [at this press conference] have made it their life’s work to improve people’s lives. I hope in coming days we can say the same about Congress.”

Chin told the press conference that basic research would be put at risk.

“We don’t know the causes of many diseases,” said Chin. “Why an apparent single disease reveals itself in different ways is still a mystery.  It is basic research, complementing translational and clinical studies, that builds a foundation of deep understanding to permit such answers.

“We need to maintain our ability to do basic research,” he added. “We need to commit to let our scientists continue to imagine deeply.”

Faust’s speech at the AAAS meeting followed similar comments in December when she appeared at a Center for American Progress event in Washington, D.C. Faust then told the crowd of diplomatic, business, and policy leaders it was important that “we not limit science support to what we can discover tomorrow, but that we allow people to ask big questions that will set the foundation for discoveries in generations to come.”

During his keynote address, Press, who served as deputy director for science and technology at Los Alamos National Laboratory, as professor of astronomy and physics at Harvard, and as a member of the Harvard-Smithsonian Center for Astrophysics, argued that science is not only beautiful but that it leads to “technology and economic growth.”

In the face of severe funding cuts and an increasing trend toward funding shortfalls for basic research, the scientific community, said Press, needs to make that case “more powerfully” and “in a more sophisticated way.”

Part of that sophisticated argument includes promoting vital research hubs, areas such as California’s Silicon Valley and the Boston area’s Route 128 corridor, that spring up around “great research universities,” said Press. “Research universities, and the industries that they engender, are able to make the benefits of science appropriable to the taxpayers in the countries, in the regions, who pay for it.”