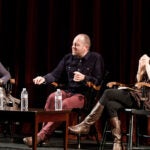 A return to the radical

Every year since 1935, the Harvard Graduate School of Design (GSD) has awarded one of its graduates the Arthur W. Wheelwright Traveling Fellowship, praised by generations of recipients for enriching careers in most cases already under way.

“Architecture frequently must be practiced before there is time for it to be properly considered,” Ker-Shing Ong, M.Arch./A.L.M. ’02, wrote in a book on the legacy of the Wheelwright. Ong, the award’s 2003-04 recipient, used it to study what she called “the awkward (and spectacular) metamorphosis” of fast-growing Shanghai.

Starting this year, the GSD has expanded the notion of the traditional award, opening the application process to early-career architects practicing anywhere in the world. Applicants are no longer required to have an affiliation with the GSD.

In its new iteration, wrote GSD Dean Mohsen Mostafavi on the application page, “the Wheelwright Fellowship will be able to have a significant impact on the intellectual projects of young architects and, in turn, on the future of architecture and the built environment.”

The size of the Wheelwright award — $100,000 for travel and research-related expenses — makes it the financial equal of the Pritzker Architecture Prize, awarded to established practitioners since 1979 and considered the discipline’s Nobel.

But the Pritzker is “for work already done,” wrote Mostafavi; the Wheelwright is designed to “promote research for travel that would otherwise not be possible.”

Along with the money, Wheelwright recipients will be invited to lecture at the GSD and given the opportunity to appear in a GSD research publication. The application platform for the 2013-14 prize opened on Jan. 17, and will close Feb. 28.

Applicants must have graduated from an accredited architecture program in 1998 or later. An international jury — as yet unnamed — will judge Wheelwright applications based on scholarship, originality, persuasiveness, and evidence that the proposed research will be finished. The jury will also consider how proposed research will impact a given career.

A single winner — teams and firms are not eligible — will be announced in May. The fellowship recipient will be expected to spend at least six months outside his or her country of residence. Research travel must start within 12 months of getting the Wheelwright, and finish within two years.

The newly defined fellowship casts a global net for applicants, and so offers what Mostafavi called “a gift by the GSD to young architects from all over the world.” At the same time, he added, “of course we expect our own graduates to apply.”

Mostafavi sees the newly defined Wheelwright in both grand and practical terms. On the one hand, the GSD hopes “to shape the landscape of architecture as a discipline,” he said. “At the same time [the Wheelwright] is very much about enhancing careers and encouraging people to take a risk and participate in a life-changing adventure.”

The Wheelwright has always made it possible for young architects to take risks. In a way, it is a legacy of career courage that started with Arthur W. Wheelwright himself. The 1887 graduate of Harvard College spent a year after graduation in his father’s prosperous cotton commission house in Boston, and was clearly the heir to a robust and steady business.

Instead, young Wheelwright followed his heart, and in 1888 started a two-year study of architecture in Boston. (Harvard did not offer its first architecture course until 1893.) He then studied art in Paris for three years, struggled through a period of illness, and finally settled into the life of a gentleman farmer and part-time artist in Westwood, Mass. He died in 1932.

The original fellowship, in 1935, was the gift of his widow, Edith F. Wheelwright. It was intended, she stipulated, “for travel and study outside the United States.”

Mostafavi acknowledged the prize’s lineage — the idea of a Grand Tour of Europe, starting in the 18th century, and undertaken by prosperous Americans interested in architecture, classics, and the arts. Today, he added, “we no longer think of just Europe as the location of important ideas.”

But in the early days of the Wheelwright prize, young GSD graduates often used it to fund formative tours of Europe that were either beyond their means or were impossible because of family and professional obligations.

I.M. Pei — a Pritzker winner and now among the world’s most iconic architects — was the 1950-51 recipient of the Wheelwright. (His studies at GSD began in 1942.) “Travel was expensive and few people could afford it,” he wrote in a 2005 essay about getting the coveted fellowship. “Today many of the recipients have already been to Europe, but in my day, none.”

Pei and his wife bought a small car in London, crossed the English Channel, and spent four months motoring through Paris, Rome, Naples, and Vienna. They also toured old and new architecture sites in Sicily, Greece, and Germany. “I didn’t want to sleep while I was there; I just wanted to keep moving,” said Pei of his Wheelwright-funded journey. In the end, he added, the fellowship and fervent travel “meant more to me than all I had learned at Harvard and MIT.”

Europe was also the destination for Paul Kruger, M.Arch. ’59, the Wheelwright’s 1963-64 recipient. His family of four boarded an eight-passenger freighter in March 1964 and set out on a Grand Tour that lasted nearly a year. Kruger was 32 by then and had spent most of the previous 14 years studying and practicing architecture. The year away was “our dream come true,” he wrote in his Wheelwright essay. “I saturated my senses.”

The next year, William Morgan, M.Arch. ’58, winner of the 1964-65 Wheelwright, broke the Grand Tour mold. He and his wife made study trips to Peru, Japan, Cambodia, Thailand (where he was detained for hours as a suspected spy), India, Iran, Lebanon, and Jordan. They came back “filled with enough excitement to last two lifetimes,” wrote Morgan. His field notes on ancient terraces and subterranean dwellings inspired a lifelong interest in earth as a building material.

Recipients soon fanned across the world. Minoru Takeyama, M.Arch. ’60 (1971-72 winner), studied streets throughout Europe, the Middle East, the Far East, and the United States. Corky Poster, M.Arch. ’73 (1976-77), traveled from the north of Mexico through the south of Chile to study high-density housing. (In Peru, he recalled, one night’s hotel bill came to 34 cents.)

By the time Ong did her Wheelwright research in Shanghai, in 2003 and 2004, award recipients were still traveling to Europe, but the world itself had plainly become the fellowship’s wider stage. Its greatest gift is to help young architects pause during an early-career “rush to futurity,” she wrote, and to allow them insights “not immediately available in practice.”