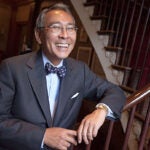 He wrote the book of love

Libonati polishes craft with new staging of 'Hansel and Gretel'

Late last year, as the student performers at the A.R.T. Institute readied for their newest production, a reworked version of the brothers Grimm tale “Hansel and Gretel,” they turned to their leader for some last-minute direction.

The show’s youthful director, Allegra Libonati, ran through the scenes with a watchful eye, tweaking movements and adjusting lines here and there. The 12-hour days in the run-up to the production are the norm for the resident director who has her hands in myriad theatrical projects — and couldn’t be happier about it.

“I feel like the luckiest person alive,” Libonati said during a break from rehearsals.

Libonati has theater in her DNA. Her mother was in the original Broadway production of “Grease” and appeared in the soap opera “One Life to Live.” Her father directed TV commercials and music videos, and occasionally cast his young daughter in bit parts, such as a street urchin in a Richie Havens music video.

“Nothing else really ever stuck as deeply as wanting to be in the business,” said Libonati. She fell in love with working behind the scenes while in college at the Tisch School of the Arts in New York City. There, she directed “The Island,” an intense drama about political prisoners based on South Africa’s notorious Robben Island, where Nelson Mandela was confined for 27 years.

“It just kind of rocked my world,” said Libonati. “It showed me how powerful theater can be, how much of a resonance it can have, and what kind of an impact you can have on people emotionally.”

Libonati carried that passion to graduate school, where she reached out to one of her former professors in hopes of securing a brief internship. “I had always remembered how much I loved her work, how inspired I was by her,” said Libonati. That professor was Diane Paulus, who had just been hired as artistic director of the American Repertory Theater (A.R.T.). Libonati’s internship morphed into a regular position as a fellow, then as an artistic associate. She became the assistant director on various productions.

She has been resident director for “The Donkey Show,” associate director for “Prometheus Bound,” and assistant director for “Death and the Powers: The Robots’ Opera,” “Best of Both Worlds,” and the Tony Award-winning revival of “Hair” on Broadway. Libonati also curates “The Chairs Revue,” a festival of theater and performance in Harvard Yard.

In 2011 she was at the helm of the reimagined version of the classic fairy tale “The Snow Queen,” by the Danish storyteller Hans Christian Andersen. It was performed by students from the A.R.T. Institute, a two-year, graduate training program for aspiring actors and dramaturges.

“Children’s theater is an incredible, rich theatrical genre,” said Libonati. “There’s so much freedom and so many challenges in bringing a fantasy world to life that are a dream for the director.”

For “Hansel and Gretel,” which opened Dec. 15 and runs through Jan. 6, one challenge was creating a new version of the crafty and cunning witch at the story’s core. For help, Libonati turned to Michael Kane, the former institute member and puppeteer who had created the enormous head of the A.R.T.’s eerie snow queen.

For “Hansel and Gretel,” Kane’s “amazing creative mind,” in collaboration with the team of actors and designers, developed a witch with a giant talking stomach, a nod to the play’s themes of gluttony and desire. But Libonati and her creative team didn’t just rework the wicked witch. They also reframed the narrative around the Grimm brothers’ dark source material.

“There are haunting issues of abandonment and hunger. We wanted to find a way to get into that story but come away with a message of family and coming together,” said Libonati.

In the end she and her collaborators removed the character of the evil stepmother altogether. Instead, the story revolves around the play’s two young protagonists, their trials with the child-eating witch, and their efforts to reunite their family.

“We didn’t want to vilify one parent over another and instead focused on how a young brother and sister could bring the family back together,” Libonati said.

The production also includes a tangible social message. Audience members are encouraged to bring canned food to the show. Libonati helped to plan and organize a food drive as part of the theater experience, in keeping with the A.R.T.’s directive of “expanding the boundaries of theater.”

“Hansel and Gretel are hungry, yet they are able to find strength in themselves to continue to take care of each other,” said Libonati. “We are giving children who come to see the show an opportunity to really take social action themselves.”