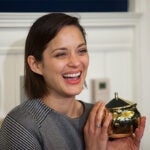 Marion Cotillard is Woman of the Year

Focus on his message should include economic, political justice for all, Rev. Walton tells memorial gathering

The Rev. Jonathan Walton, Harvard’s Pusey Minister of Memorial Church and Plummer Professor of Christian Morals, galvanized Boston’s 43rd annual Martin Luther King Jr. Memorial Breakfast this morning with a stirring keynote speech that contrasted the present-day ”sanitized and sterilized” version of the civil rights leader’s dream for America with what Walton said was the real message that King left behind.

Walton cited 1965 as an important turning point for King. It was “the year King moved beyond civil rights,” said Walton, “to human rights, to economic justice,” and to promoting peace in war-torn Vietnam. The problems of poverty and war, Walton said, remain today and seem to be worsening, as huge sums “go to support the military-industrial complex,” while programs for the poor are slashed in the name of fiscal responsibility.

“We need [King’s] wisdom now like never before,” Walton said.

Walton highlighted the post-1965 King as moving from scripture to political action on behalf of the poor of all races. King’s broad campaign ended with his assassination three years later.

“Poverty, famine, and war aren’t predicated on skin pigmentation,” said Walton, something he said King well understood. Walton urged the packed audience at the Boston Convention and Exhibition Center to “stop honoring … King with our lips. We need to accept King’s challenge for a revolution of values” that stresses economic justice and peace-building.

Many people in power, Walton said, don’t want King’s message of economic justice to be an inherent part of his legacy. “The media panders to the status quo,” said Walton, while “there are those in power who seek to keep us dumb, deaf, and blind.” A perpetual state of ignorant bliss, the innocent state that he said his own young children largely find themselves in, is not conducive to fostering social change.

While Walton praised the symbolism of President Barack Obama’s second inauguration on the same day the nation celebrates King’s legacy, Walton asked the audience to focus not just on “the T-shirts” and slogans about how far the nation has come with an African-American in the White House, but to pursue King’s “real” dream by “moving away from materialism” and toward spiritual connection, based on justice and community.

“King was clear and consistent,” said Walton. “He didn’t sit back and accept an economic system that privileges the few over the many.” Walton called for more active engagement in bringing King’s later legacy to life, saying, “It’s easier to celebrate a dead icon than heed the admonitions of a prophet.” To truly honor King, people should act to transform his legacy into reality by helping others, he said.

Before Walton spoke, Massachusetts Gov. Deval Patrick and U.S. Sen. Elizabeth Warren both addressed the breakfast via satellite from Washington, where they were attending Obama’s inauguration. Patrick, while praising both King and Obama, also emphasized that “there’s more to do” to make King’s dream a reality, especially in the areas of education and economic opportunity for all. Warren promised to help the government to better assist all Americans.