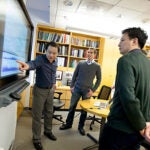 One cell is all you need

More than a third of U.S. physicians responding to a national survey indicated they often or sometimes prescribed brand-name drugs when appropriate generic substitutes were available simply because patients requested the brand-name drug.

“Since generics are from 30 to 80 percent cheaper than the brand-name versions, that would represent a significant source of unnecessary health costs,” said Eric G. Campbell of the Mongan Institute for Health Policy (MIHP) at Massachusetts General Hospital (MGH), who led the study.

Survey respondents who had marketing relationships with pharmaceutical industry were more likely to fulfill such patient requests than were those without those relationships. The report from investigators at the MIHP and Harvard-affiliated Massachusetts General Hospital will appear in JAMA Internal Medicine and has been released online.

“The good news is that 63 percent of physicians indicated they never or rarely prescribed a brand-name drug instead of an equivalent generic simply because of a patient request. However, our data suggest that a substantial percentage — 37 percent or about 286,000 physicians nationally — do meet those requests,” said Campbell, a professor of medicine at Harvard Medical School (HMS).

In 2009, the survey of medical professionalism was sent to 3,500 physicians — 500 each in internal medicine, family practice, pediatrics, cardiology, general surgery, psychiatry, and anesthesia — and almost 1,900 responded. One of the survey questions asked physicians to indicate whether during the previous year they had “prescribed a brand-name drug when an equivalent generic was available because the patient asked for the brand-name drug specifically.” The available answers were “never,” “rarely,” “sometimes,” and “often,” and about 40 percent of the respondents answered “sometimes” or “often.”

Physicians who had been in practice more than 30 years were significantly more likely than those in practice for less time to report filling patient requests for brand-name drugs, as were physicians in solo or two-person practices. Doctors in internal medicine and psychiatry were the specialists most likely to honor such requests. Receiving industry-sponsored food or beverages in the workplace and receiving free drug samples — both of which are common marketing practices of pharmaceutical companies — were associated with a greater likelihood of prescribing brand-name drugs, although no association was seen with industry-paid speaking or consulting or with receiving industry gifts or reimbursement of travel expenses.

“While we cannot prove a cause and effect between industry marketing activities and prescribing practices, at the most basic level these data suggest that industry marketing works,” said Campbell. “Our results also raise serious doubts about the desirability of meeting with drug company representatives to ‘stay up to date.’”

The authors note that measures to reduce unnecessary brand-name prescribing should include efforts to educate patients — who are targeted by drug-company advertising — as well as physicians about how wasteful the practice can be. Hospitals and health systems could require drug samples to go through their pharmacies, instead of directly to prescribing physicians, and could ban industry-provided food and beverages from their premises. Another option would be making the decision to prescribe a brand-name or generic drug the primary responsibility of pharmacists — as is currently the case in the U.S. Veterans Health Administration — while allowing physicians to stipulate a brand-name drug for special circumstances.

“Reducing or eliminating this practice represents low-hanging fruit in terms of reducing unnecessary spending in medicine,” said study co-author Christine Vogeli, an investigator with MIHP and an assistant professor of medicine at HMS. “However, doing so will likely be unpopular with some patients, physicians, and certainly with the drug industry.”

Additional co-authors of the JAMA Internal Medicine research letter are Genevieve Pham-Kanter of the MIHP and the Edmond J. Safra Center for Ethics at Harvard University, and Lisa Iezzoni, director of the MIHP. The current study and overall survey were supported by a grant from the Center on Medicine as a Profession at Columbia University.