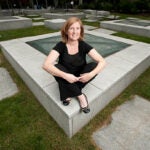 Take a breath, and give thanks to photosynthesizing bacteria. Look at the trees, grasses, birds, and squirrels and think of the early plants, which paved the way for the life around us.

“Plants have a wonderful way of reminding us how lucky we are to be here, how lucky we are to sit on 3.5 billion years of evolutionary history and be here to have this conversation,” William Friedman, director of the Arnold Arboretum, said Monday during a talk at the Hunnewell Building.

The world we live in was produced by many evolutionary steps, and some of those steps have been taken many times by different organisms. Arborescence — changes in plants that create towering trees — evolved five times over 20 million years, for example. But there were two important changes that have occurred only once in the evolutionary record, and we have the precursors of plants to thank for both, Friedman told an audience of about 100.

The first happened early in Earth’s history, when the atmosphere contained no oxygen. Bacteria used photosynthesis to harvest energy from the sun, but the process was different from what we see today in plants, Friedman said. Early photosynthesis used hydrogen sulfide instead of water and gave off sulfur instead of oxygen. The key evolutionary step, Friedman said, was the switch to a process that used water and released oxygen into the atmosphere. The switch eventually created oceans full of photosynthetic bacteria — cyanobacteria — that pumped oxygen into the atmosphere.

“That was a major event in the history of the Earth,” Friedman said. “Cyanobacteria, they set the agenda for everything that comes afterward.”

The second major evolutionary jump, Friedman said, was the leap of an aquatic plant onto land, some 475 million years ago. Microbial life had colonized the land earlier, but it was the movement of plants onto land that created a food source that allowed animal life to follow. That movement occurred just once, Friedman said, when a single lineage of green algae survived on the ocean’s edge. It evolved into primitive plants like today’s liverworts and mosses, and gave rise to the large variety of land plants we know today.

“Our history is tied to these rare, extraordinary events,” Friedman said.

Friedman’s talk was the first in the Arboretum’s spring Director’s Lecture Series. He showed slides of some of the diversity of microbial photosynthetic life and also talked about the importance of another process, symbiosis, in complex plant life.

Modern plants owe their existence to an ancient act of symbiosis, when an early single-celled ancestor engulfed a photosynthesizing cyanobacterium. In this instance, the cyanobacterium was not digested and instead became part of the cell. It eventually became the chloroplast that performs photosynthesis in plant cells today.

The next talk in the Director’s Lecture Series, “Biodiversity 2013: Crisis and Opportunity” by Harvard Professor of Biology and Alexander Agassiz Professor of Zoology James Hanken, will be held on Feb. 25 at 7 p.m. The lecture is free, but registration is requested. Visit the website to register and view upcoming lectures.