Music for a better world 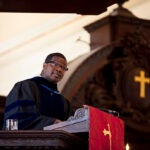 Music entertains, but it also can fuel hope and happiness.

So it did on Saturday, when the Harlem Gospel Choir celebrated the life and legacy of Martin Luther King Jr. at the annual Joyful Noise gospel concert at Sanders Theatre.

“I want 2013 to be the year that we, all of us … dedicate ourselves to building a community of mutual respect and kindness,” said Shelley Neill, the executive director of the Cambridge Multicultural Arts Center, which has staged the concert for 26 years.

“If there is one single message among all the messages that Dr. King left behind, it would be to take heart and put it in practice to help build a community based on mutual respect.”

Neill, who in the past has opened the festivities with children’s stories or tape recordings of King’s speeches, this year began the concert with her own powerful, a capella rendition of “You Gotta Move” by the blues artist Mississippi Fred McDowell. The packed house of nearly 900 came in on the chorus, “When the Lord gets ready / You Gotta Move,” and kept time by stamping their feet on the floor to create the sound of marching.

The song was dedicated to the late Will Hills, a former Arts Center board member who had passionately supported the concert and whose family and friends helped make it an annual event, and John and Terri Traverso, the tour manager and production manager of the Harlem Gospel Choir.

Neill then turned the stage over to the Harlem Gospel Choir, just returned from a month in China. Neill said the New York-based group was founded in 1986 by Allen Bailey after he attended a celebration to honor King; it has since performed for Barack Obama, Nelson Mandela and Pope John Paul II, with the stated mission of “bringing people and nations together and giving back.” This year marked the seventh time the group has sung the Joyful Noise concert.

The choir’s nine vocalists, keyboard player, drummer, and bassist performed “Total Praise” to mark their return to America, then launched into a set that included many of the songs popularized by Whitney Houston. The crowd enthusiastically participated when invited, singing along to “The Greatest Love of All” and “I Go to the Rock,” which became a resonant call and response, with sopranos, altos, basses, and tenors standing and singing in turn until all were on their feet. And at Houston’s best-known recording, “I Will Always Love You,” the choir received a standing ovation.

When the group finally left the stage, the house lights came up — and nobody left. Rather, the audience stood firm and clapped and cheered and cried for more music. The choir returned and sang a moving “We Are the World” to a delighted and grateful crowd.

The evening was co-sponsored by the Center and Harvard’s Office of Government, Community and Public Affairs and the Cambridge Multicultural Arts Center, with help from the Massachusetts Cultural Council, the city of Cambridge, the Boston Phoenix, the Bay State Banner, and the East Coast Grill.