Marion Cotillard is Woman of the Year 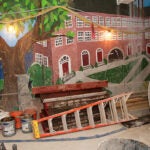 French actress to be honored by Hasty Pudding Theatricals

Harvard’s Hasty Pudding Theatricals has announced Marion Cotillard as the recipient of its 2013 Woman of the Year award. The troupe is proud to honor the internationally renowned actress, who continues to challenge herself with a wide range of critically acclaimed performances.

The Woman of the Year festivities will begin at 2:45 p.m. on Jan. 31, when Cotillard will lead a parade through the streets of Cambridge. Following the parade, the president of the Hasty Pudding Theatricals, Renée Rober ’13, and the vice president of the cast, Ben Moss ’13, will host a celebratory roast for the actress. At 4 p.m., Cotillard will be presented with her Pudding Pot at Farkas Hall, since 1889 the Hasty Pudding’s home in the heart of Harvard Square. A press conference will follow the presentation.  Afterward, Hasty Pudding cast members will perform several musical numbers from the group’s 165th production, “There’s Something About Maui.”

The Man and Woman of the Year awards are presented annually to performers who have made a lasting and impressive contribution to the world of entertainment. Established in 1951, the Woman of the Year award has been given to many notable and talented entertainers, including Meryl Streep, Katharine Hepburn, Julia Roberts, Jodie Foster, Elizabeth Taylor, Anne Hathaway, and, most recently, Claire Danes. The Man of the Year award was established in 1963. Its past recipients include Clint Eastwood, Tom Cruise, Robert de Niro, Steven Spielberg, Harrison Ford, Anthony Hopkins, Bruce Willis, Justin Timberlake, and, last year, Jason Segel.

Cotillard is internationally renowned for her unbridled commitment to her art. In 2008, she became the second French actress ever to win an Oscar, and the first to win an acting award for a performance in the French language. The worldwide critical acclaim came for her riveting portrayal of legendary French chanteuse Edith Piaf in the film “La Vie En Rose.” For her role, Cotillard also received a best actress BAFTA, Golden Globe, and César Award, as well as nominations for a Screen Actors Guild and Critics Choice award. In addition, she was named best actress by critics’ organizations worldwide, including the Los Angeles Film Critics Association and the London Film Critics’ Circle.

Cotillard can currently be seen in Jacques Audiard’s “Rust and Bone,” in which she stars as Stéphanie, a whale trainer in the south of France who loses both her legs in a freak accident and must regain her sense of self. Cotillard’s performance has been lauded as her strongest and bravest yet, garnering wide critical acclaim, including Golden Globe, Screen Actors Guild (SAG), and Critics Choice Award nominations for best actress. Additional credits include Christopher Nolan’s “Inception” and “The Dark Knight Rises,” Woody Allen’s “Midnight in Paris” (which garnered Oscar, Golden Globe, and SAG Award nominations for the best motion picture), Steven Soderbergh’s “Contagion,” and Guillaume Canet’s “Little White Lies.”

In 2010, Cotillard was named a Knight of the Order of Arts and Letters, for her contribution to the enrichment of French culture. Born in Paris, she studied drama at the Conservatoire d’Art Dramatique in Orléans.

To purchase tickets to the “There’s Something About Maui,” contact the Hasty Pudding Theatricals Box Office at 617.495.5205, or order online. The show runs through March 10 in Cambridge. The company then travels to New York to perform at Hunter College’s Kaye Playhouse on March 15 and 16 (call 212.772.4448 for tickets). The tour continues to Hamilton City Hall in Bermuda for performances on March 20-22. The group will announce its Man of the Year next week. That presentation will take place Feb. 8.

Press credentialing is now open for both the Woman and Man of the Year events. Press information and an online application form can be found at /gazette/hasty-pudding-awards-2013. For more information, contact Harvard Public Affairs & Communications at 617.495.1585.

For more information about the event, call 646.620.6173 or email press@hastypudding.org.