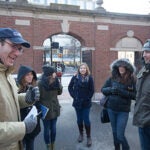 Tony-winning director explains vision for 'The Glass Menagerie' at A.R.T.

It might seem strange that someone as cheery as John Tiffany is directing a play as fraught with despair as “The Glass Menagerie.”

But for the sanguine director, the world is full of risks that don’t always come with immediate rewards — much like the early life of playwright Tennessee Williams, who struggled to find success until writing “Menagerie,” the work that mirrored his own turbulent youth, launched him to stardom.

Tiffany, who last year won Tony Awards for best musical and director, knows that you can’t be rewarded unless you take risks, and that sometimes those come with a price.

On a recent lunch break in the basement of a Cambridge church used for rehearsals, the affable and animated Tiffany discussed his approach to the intimate and intense classic of the American theater canon. His new vision of the play opens at the American Repertory Theater (A.R.T.) on Saturday.

“I am one of those people who would happily live in a world of unicorns,” said the British director, referencing one of the play’s delicate glass figurines beloved by its equally fragile central character, Laura. But Tiffany also knows that Laura ultimately took a risk and “opened her heart.”

While the young woman’s fate may not be the stuff of unicorns when the final curtain falls, Tiffany thinks the play sends a hopeful message, “almost like a call to arms for the fragile and the damaged of the world to not just be allowed to survive, but to thrive,” he said. “If we do our job properly, I hope the audience hears that call.”

Tiffany’s potentially risky approach to the play, most notably its set, is based on what Williams dubbed “plastic theatre,” and the director hopes that will resonate with audiences. (In his “Menagerie” production notes, Williams described his vision of a new theater that rejected “realistic conventions” and instead used “unconventional techniques” to get closer to the truth.)

Tiffany is answering a creative call to arms “to use all the tools that you have in theater, whether it be visual, oral, musical, lighting, movement.” The result creates something “more visceral” than realism, he said, “which actually goes beneath the surface of that realism.”

To achieve that effect, Tiffany is working with two of his collaborators from his Tony-winning musical, “Once”: lighting designer Natasha Katz and A.R.T. resident sound designer Clive Goodwin. The lighting, Tiffany said, will bring “a type of crepuscular quality” to the set and help highlight the emotional strands that make up what Williams called his “memory play.” Tiffany also recruited his longtime collaborator, choreographer Steven Hoggett, to produce a “physical vocabulary” for the play. Composer Nico Muhly wrote the contemporary score based on “classical roots,” said Tiffany. Williams noted the play’s music should act as “an extra literary accent.”

Then there’s a circle of black liquid, a central element of the set — and likely its riskiest — a concept developed by Tiffany and set designer Bob Crowley. “The visual effect, they hope, will be of a lonesome home adrift in the galaxy, with stage lights dancing off the viscosity like stars,” wrote theater reporter Patrick Healy in The New York Times.

Tiffany has close ties to Harvard and the A.R.T. His relationship with dynamic producer Diane Borger goes back to their days in the London theater. When he arrived at Harvard in the fall of 2010 for a fellowship at the Radcliffe Institute for Advanced Study, Tiffany quickly connected with Borger and A.R.T. artistic director Diane Paulus. Together, they agreed he should continue to develop “Once” at the A.R.T.

He had planned to spend his Radcliffe year away from the stage, learning from neuroscientists, linguists, and Shakespeare experts about paralanguage, or, as he described it in 2011, “everything that comes out of our mouths when we communicate apart from the words,” including intonation, volume, accents, and dialects. But the energy for “Once,” which he had just workshopped in London, was building.

An early version of the musical ran at the A.R.T.’s space Oberon in 2011. It soon moved to Broadway, where it won eight Tonys in all.

Like Paulus, Tiffany likes to challenge theater’s traditional boundaries. That common ethos led to an instant connection between them and to conversations about finding a project Tiffany could bring to the A.R.T.’ s Loeb Drama Center stage. “Menagerie,” which he first read in college and loved, topped his list.

“I connect on a quite deep emotional level with this family, all four characters, and the fact that they were trying to escape something. … I find that very moving as a setup, as a story.”

Much has been written about the play’s autobiographical nature. Williams himself is reflected in Tom, the struggling son stuck in a menial job who yearns for the life of a poet. The character Amanda closely resembles Williams’ driven but difficult mother.

For Tiffany, casting was critical.

A former Radcliffe colleague introduced him to Cherry Jones, and Tiffany had found his Amanda. The actress, an A.R.T. veteran, impersonated her mother’s Tennessee accent at lunch one day with Tiffany, and “suddenly everything came together.”

As a former associate director of the National Theatre of Scotland, Tiffany is no stranger to managing large casts or lavish productions, such as the 2006 work “Home,” a cutting-edge theater piece that unfolded in multiple locations across Scotland simultaneously. His take on Shakespeare’s “Macbeth,” which ran last year at New York’s Rose Theater, had only a cast of three, but was a “huge multimedia production.”

In contrast “Menagerie,” with its small cast and intimate setting, lets Tiffany dive into detail.

“What’s fantastic is to sit down with this amazingly talented group of artists … and not ask the question, ‘Does this work?’ but ask, ‘How does this work?’ We know it works,” he said. “Otherwise we wouldn’t still be doing it nearly 70 years after it was first written. The question ‘How does it work?’ is really quite exhilarating.”