Homing in on bones 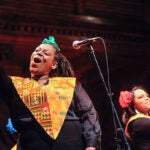 Music for a better world

“Oh, cool!” Cambridge third-grader Cosmo Cao said as he peered through a microscope’s eyepieces. “I see lots of holes!”

Cao wore a fascinated smile as he examined a piece of bone, even though he didn’t really need a scope to see one. Bones were strewn all around him.

Cao and his Cambridge elementary school classmates spent part of last Thursday morning working with bones and surrounded by skeletons of fish, birds, and mammals in the Zooarchaeology Laboratory in Harvard’s Peabody Museum of Archaeology and Ethnology.

The lab, on the Peabody’s third floor, specializes in identifying bones from archaeological dig sites, which can tell researchers not just what animals were present, but also provide clues about the broader environment and how humans might have used an area.

Though the lab is normally busy with Harvard students and researchers, it opens its doors each winter break to Cambridge schoolchildren, this year hosting 125 children from three schools, according to Polly Hubbard, the Peabody education program manager. It also opens to the public each Columbus Day.

“The museum has a wonderful opportunity to open the lab to [give] a special behind-the-scenes look at Harvard’s resources, both its material resources and its human resources,” Hubbard said.

On Thursday, third graders from Cambridge’s Haggerty School filled the lab. Small groups of students moved among five stations set up around the large table that dominated the room, each stop highlighting an important aspect of zooarchaeology.

On the table were two large plastic sheets outlining skeletons of a dog and a sheep, with a pile of bones nearby. Under the guidance of volunteers, students learned about carnivores and herbivores’ bone structures, including about a ram’s horns and a dog’s teeth.

At the other stations, students learned about adaptations made by birds, including talons and beaks for hunting. The students learned about the tools that scientists use, such as microscopes, to analyze findings and ferret out information. They also learned how replicas are made for display in museums, examining molds used to recreate a skeleton of the famed early human ancestor Lucy, the 3.2 million-year-old Australopithecus afarensis uncovered in 1974.

On the walls and in the cabinets were skeletons of fish, birds, and mammals. Stacks of wooden drawers holding specimens lined part of the room, bearing labels like “extra bird skeletons,” “large mammal, species unknown,” and “Equid” bones — horses, donkeys and the like — that were gathered in Iran. There were skulls, vertebra, leg bones, shoulder blades, and more. One set of shelves held large horned skulls, mainly of the domesticated water buffalo and the humped Indian cattle called zebu.

Deyne Meadow, a former science teacher and science education volunteer for Cambridge schools, led the class. She said afterward that it’s important that Harvard provides local children with a look behind the ivy walls.

“We just do this once a year, in January when Harvard is not in session,” said Meadow, who is the wife of the lab’s director, Richard Meadow. “We want to reach the public schools and let kids have the opportunity to come behind the walls.”

Ashley Warlick, one of the third grade class’ co-teachers, has brought students to the zooarchaeology lab for the past several years. The lab, she said, allows students to engage hands-on with a subject matter they are learning in class: how animals adapt to habitats.

“Bones in general are just so cool for them,” Warlick said. “We study habitat as part of the third grade curriculum. This is a wonderful opportunity for kids to see different animals and see how their bone structure affects their choice of habitat.”

Warlick said the Peabody and the nearby Harvard Museum of Natural History (HMNH) are both great resources for local schools.  With a limited budget for field trips, Warlick said she can keep costs down by taking public transportation. Admission for Cambridge schoolchildren is free.

She brings her class for structured events like the session at the zooarchaeology lab, and then stays to visit the rest of the museum. She also has taken her classes to activities at the HMNH.

“This entire place is an outstanding resource,” Warlick said. “It’s amazing to have not only this [zooarchaeology] classroom, but the entire museum. So much of what is here aligns with what is in our curriculum.”