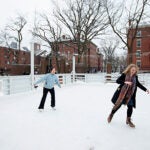 Ice skating in the frosty air

The lion is king in this ‘secret’ garden

Asked what she likes about Busch Courtyard, Michelle Timmerman ’13 writes, “It’s … an enclave, and is so apart from standard Harvard architecture, and therefore feels apart from standard Harvard life, that you can tuck away there, slip in the side gate — or, if you’re well-informed and well-intentioned, through the Center for European Studies building itself — and disappear.

“When I was little, I was big on Frances Hodgson Burnett, and I suppose the ‘secret’ nature of the ‘secret’ garden doesn’t hurt — though it’s not a secret, really. When I’ve entered the garden to find it already has an inhabitant, initial disappointment is quickly swept away by spontaneous affection and — with recognition of parallel taste in study spaces — respect. Also, aren’t pink roses beautiful?”

The space with the pink roses sits toward the center of campus, yet is concealed by walls on four sides. Not hidden, however, is Harvard’s replica of Braunschweiger Löwe, or the “Brunswick Lion,” which, on its tall pedestal, can be seen from afar, beckoning visitors into the space.

Building Manager Sandy Selesky, who over the years has contributed lilacs, geraniums, pansies, impatiens, and two stone gargoyles to the garden, cares for the courtyard. She had lava stones installed in the aesthetic pool to help the red-tailed hawks step out, and she purchased furniture and added a bubbler to the pool.

In the summer, people come and eat lunch in the courtyard, and some classes hold their discussions on the lawn. But overall, it’s quiet and unlike nearby bustling Harvard Yard. Professor Patrice Higonnet, whose office faces the courtyard, remarks, “Hmmmm. A hidden space. Wouldn’t it be — selfish thought — just as well to keep it hidden?”