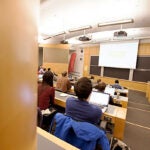 An idea that changed the world

While many students were savoring the dwindling days of relaxation before the spring semester’s grind, Harvard freshmen Josh Palay and Andrew Mauboussin were back on campus last week, already putting in long hours of work.

The two were designing a new, unofficial, online interface for Harvard’s Q Guide, the website where students can find evaluations of Harvard courses written by past students in the class. While the site is a good resource for students considering taking a course, it contains data that’s not easily accessible, such as a comparison of course evaluations over several years, according to Palay. Palay and Mauboussin want to put that information at students’ fingertips.

“I felt kind of frustrated with the original interface,” Palay said. “We’re making it easier to find courses, nicer to look at. We’ve added charts to view [instructional] trends.”

Palay and Mauboussin formed one of 17 student teams participating in Hack Week, an intense, immersion-style incubator for student computer science projects. Sponsored by the Harvard student group Hack Harvard, the “week” was held over 10 days, from Jan. 18-27, mixing 21 seminars on topics intended to help students advance their projects, visits to area technology companies, and work sessions to push projects to completion.

Held at the Harvard Innovation Lab (i-lab), students regularly worked until 1 or 2 a.m. and pulled at least one all-nighter, Friday night’s “hack-a-thon” — a 9 p.m. to 6 a.m. push to help students finish their projects in time for “demo day” on Sunday.

Hack Harvard’s president, Lexi Ross, and Zach Hamed, a member of the group’s organizing board, said the purpose of Hack Week is not just to push students to finish projects, but also to get them thinking about how to get the projects out to the real world, to consider not only software issues, but also business plans, financing, and the steps needed to take a project from the dorm room to Main Street.

“It’s an incubation program to turn student projects into startups,” Ross said. “It’s an intense week for computer science students, particularly first- and second-year, and gives them a taste of being an entrepreneur.”

Hack Week draws back alumni from previous sessions, including senior Peter Boyce, who was a founder of the first Hack Week and served as a mentor this year. Boyce, who with Hamed and five students from other colleges began a startup called Rough Draft Ventures, offered a seminar on how to become part of the Boston tech scene.

“It’s really important to share my experience, having been part of a startup,” Boyce said. “All this stuff thrives on the pay-it-forward model.”

Projects selected for Hack Week include the Q Guide redesign, video games, health and fitness programs, and a project to enable instant in-store communication between retailers and their customers.

The last project, worked on by freshmen Nithin Tumma and Neel Patel, is creating a way for businesses to push a variety of content — maps to a store, discount coupons, and the like — to customers’ mobile phones. Customers, in turn, can live chat with store personnel if, say, they need help in an aisle where no clerks are available.

For example, Tumma and Patel said, a grocery store could push out a coupon giving discounts on produce that, while still fresh, isn’t moving as quickly as it should. It could reach customers who were shopping in the store at the time and prompt them to make a purchase. The businesses would also be able to harvest analytics from the system to learn more about their customers.

By midweek, Tumma and Patel had the basic infrastructure designed. Once completed, they hope to test it with local businesses.

“It lets businesses address customers’ needs within the store,” Patel said. “The Hack Week support, just being around people working on similar projects, is awesome.”