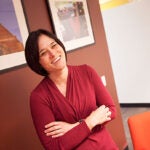 Harvard offers reimbursements to those who bike to work

Commuting to work at Harvard just got a little easier thanks to two new initiatives being rolled out by the CommuterChoice Program this winter. The expanded benefits will offer bicyclists tax-free reimbursements for bike-related expenses, including purchase and repair, and will provide Emergency Ride Home services to faculty and staff commuters who do not travel by car.

“I think that the [Bicycle] Commuter Act benefits, in tandem — pun intended — with the Emergency Ride program, will allow people who have thought about going with a more green commute to really try it,” said Thomas Lingner, a Harvard College Library employee and regular bike commuter.

Bicycle reimbursements will begin in the 2013 calendar year as part of the Bicycle Commuter Benefits Act and will be provided to faculty and staff commuters who do not receive a subsidized monthly MBTA pass or annual parking permit from the University and can provide proof of bicycle registration through the Harvard University Police Department. Employees will be eligible for reimbursement of the costs of bicycle purchase, improvement, repair, and bicycle storage at a tax-free rate of up to $20 per month with a maximum of $240 per year. The reimbursement will come from the University directly.

Once I began commuting by bike, I started to really look forward to those two rides each day. I bike about 4.5 miles each way, less than 20 minutes, but even that short time outdoors makes such a difference to my mental health.” — Thomas Lingner

In order to take advantage of the benefit, employees should start saving cycling receipts for calendar year 2013 and submit them with a completed “Bicycle Expense Reimbursement Request” form between Jan. 1 and March 31, 2014, to Crosby Benefits Systems. The form can be downloaded on the CommuterChoice website.

“Once I began commuting by bike, I started to really look forward to those two rides each day,” Lingner continued. “I bike about 4.5 miles each way, less than 20 minutes, but even that short time outdoors makes such a difference to my mental health. I hope that this new benefit encourages others to try getting to work on a bike. It’ll change your life.”

The Emergency Ride Home (ERH) program allows faculty and staff who commute to work via transit, walking, bicycle, carpool, or vanpool at least two times per week to take a taxi, rental car, or transit in the event that they or a family member experience a personal illness or emergency. The program reimburses costs of the trip excluding tip and tax, up to four times per calendar year. Faculty and staff must sign up for the program in advance in order to be reimbursed for an emergency ride home. Since the program launched in November, more than 1,300 employees have signed up to participate.

“We’re frequently looking at ways to improve our services to faculty and staff commuters, adding choices which promote safe, healthy, and sustainable commuting options for traveling to and from campus,” said John Nolan, director of transportation services within Harvard Campus Services.

As a result of Harvard’s comprehensive sustainable commuting programs, the percentage of employees who commute to the Cambridge and Allston campuses by driving alone has dropped 50 percent since 1999, with 79 percent biking, walking, or taking mass transit. Providing faculty and staff with alternatives to driving is not just about reducing greenhouse gas emissions and the University’s impact on the environment, it’s also about promoting healthier travel options. (Harvard is also a major supporter of the Hubway regional bike-share program and the Harvard On The Move initiative that promotes physical and psychological wellness though noncompetitive walking and running programs.)

“Since we started the Harvard Longwood Bicyclists group earlier this year, one of the main issues that kept coming up at events was the need for incentives and subsidies for bike commuters — especially because biking is an environmentally friendly and healthy behavior worth encouraging,” said David Havelick, a program coordinator at the Harvard School of Public Health. “Now that these increased bike benefits are going to be in effect starting in 2013, I am sure there will be lots of happy Harvard bike commuters in the Longwood Medical Area and across the University.”