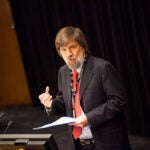 In Africa, success against AIDS

Nature vs. nurture has long been one of the great debates in science — is behavior hard-wired into the brain, or determined by environment?

In at least some cases, Harvard researchers are showing, how animals behave is in their genes.

As described in a Jan. 16 paper in Nature, a team of researchers led by Hopi Hoekstra, professor of organismic and evolutionary biology and molecular and cellular biology, studied two species of mice – oldfield mice and deer mice – and identified four regions in their genome that appear to influence the way they dig burrows.

“Given that burrowing is such a complex behavior, it was surprising that it may be controlled by just a few genes,” Hoekstra said. “More importantly, it looks like the genetics are modular, so if we think in terms of how do you ‘build’ a complex trait, it could be that as you start to put these different modules together, they add up to this complex behavior.”

According to Jesse Weber, the paper’s lead author and a former graduate student in the Hoekstra Laboratory: “People have long been fascinated about how and why animals build homes. I believe this is one of, if not the first attempt to determine which genes are associated with the evolution of animal architecture.

“Although we have not yet identified the exact genes that are involved, this study sets the foundation for research that will do precisely that,” he added. “As soon as the mutations or genes are found, I think it opens the very exciting opportunity to explore whether the same genes/mutations affect mammalian instincts in general.”

Though closely related, the species build drastically different burrows. While the deer mouse digs relatively shallow and simple burrows, oldfield mice burrows are complex, complete with a long entrance tunnel, a separate nest chamber, and an escape tunnel that nearly reaches the surface.

In the field, Weber excavated the intricate burrows of oldfield mice across their range in the southeastern United States, and found that whether in hard-packed clay or sandy dunes, the length of the burrows was remarkably constant. This suggested that their burrowing behavior might be more strongly influenced by genes than environment.

To examine the role of genetics in producing differences in burrows, Weber and his colleagues began by crossbreeding the mice. When placed in a burrowing box in the lab, the new, hybrid mice dug deep, complex burrows similar to those of the oldfield mice.

“That was a bit of a surprise, because we might guess that a hybrid would build an intermediate burrow, because it got some genes from one parent and some from the other,” Hoekstra said. “What this suggests is that the genes involved act in a dominant fashion.”

When researchers crossbred the hybrid mice with deer mice, the results were striking, Hoekstra said. While some in the group continued to build complex burrows, others built burrows that combined traits from both species.

“When we genotype those second-generation hybrids, and measure their burrowing, we’re able to see if there are any genetic regions that the small-burrowers have in common that aren’t present in mice that build larger, more complex burrows,” Hoekstra said. “Those regions are then thought to harbor genes that control the difference in behavior.”

What researchers discovered, she said, were four regions of the genome that appear to play a role in burrow design – each of the first three added about three centimeters to the length of the burrow’s entrance tunnel, while the fourth made mice approximately 30 percent more likely to dig an escape tunnel.

The next step is to begin identifying which specific genes are tied to burrowing behavior, and then to investigate how changes in those genes work in the brain to cause mice to build different burrows.

“One interesting aspect of this is that we are hypothesizing that pathways that are involved in addiction might be involved,” she said. “These mice look like they’re addicted to burrowing. It’s too early to say anything definitely, but that’s one area we are exploring.”

Hoekstra emphasized that she isn’t suggesting that all behaviors have genetic origins.

“It’s clear that both genetics and environment contribute to most behaviors. There are some that are entirely dependent on environment, and there may be some that are all genetic, but most are somewhere in between,” she said. “What we’ve shown in this case is that for this behavior, in these two species of mice, there is a large role for genes.”