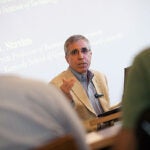 When Roman Berens signed up for the “Physics and Applied Physics Research Freshman” Seminar, he wasn’t sure what to expect.

“Initially, I really had no idea what it was about,” he said. “But I’m majoring in physics, so I thought having lab experience would be really valuable.”

Berens and other freshmen in the seminar discussed their research at a presentation at the Rowland Institute on Dec. 12. Using a handmade, laboratory-scale, Stirling heat engine, the team of students was able to generate enough electricity to power several light-emitting diodes, or LEDs, and a laptop computer.

“I’m amazed and invigorated by what our freshmen are capable of,” said Jene Golovchenko, Rumford Professor of Physics and Gordon McKay Professor of Applied Physics, and professor to the freshman seminar. “This year’s class has a wonderful collection of students who were admitted by interview to assure they were ready to take advantage of the high level of support provided them by the Rowland Institute. They are all prime candidates to concentrate in either in physics or SEAS,” the School of Engineering and Applied Sciences.

The seminar challenged students to study and improve upon the Stirling heat engine constructed by last year’s seminar students. Participants were tasked to improve on the existing model, turning it into a scientific instrument — embodying the laws of classical mechanics and thermodynamics.

“This course was my first introduction to classical mechanics,” said Cecilia Sanders, a student who presented at the seminar. “The engine itself was capable of doing some kind of mechanical work, but we wanted to transform that into something useful. The sorts of engines that we use in household generators, for example, all translate into electrical work somehow.”

The students divided into three groups to accomplish their goal. Focusing on the engine, the first team made measurements and modifications to determine the its ability to generate mechanical energy from heat, as well as examining internal mechanical energy dissipation. They collected data, minimizing energy losses and trying to make the engine more efficient. The second team focused on theory and modeled the engine using thermodynamic and mechanical considerations. The third team, which focused on turning the engine’s mechanical work into electrical energy, designed and built a multiphase motor generator that did so.

“I was on the experiment team, so we took a lot of data on the current Stirling engine,” Berens said. “We tested how fast it could run, how was it affected by heat or pressure, and so on. We were just trying to learn as much as we could in a practical, hands-on setting. I was surprised at how much we were actually able to do, all the tests that we were able to run on the engine. “

Sanders said the students’ goals evolved during the seminar. “As the semester went on, our work became more along the lines of ‘What is our engine capable of doing next?’ ” she said. “As we learned more about the engine and ran more tests, we were able to adapt our course. We were able to try new tests that we hadn’t originally planned. It was a very methodical but also a very organic experience, where we were taking what we learned every day and then mapping our course based on our results.”

Seeing science in action had an impact on Sanders. “My science background is in remote astronomy — much more along the lines of crunching numbers in a computer, looking at and analyzing images, things that are not very hands-on,” she said. “This seminar was a really unique and challenging, but also very enlightening, experience. To have this engine right in front of you, to be able to work on it directly and see all of these laws and theories that you’ve heard about happening right in front of your eyes … was an extremely rewarding and fun experience.”

For Berens, the experience solidified his interested in laboratory work. “I’m definitely excited about doing more research,” he said. “Now I know what working in a lab is like, day to day. It’s great to see these theories in action, to actually see them work — or not work — in a real-life environment. “

“Having a name like the “Physics and Applied Physics Research Freshman Seminar” can scare some people off, but it’s a great learning experience, whether you have a science background or not,” Sanders said. “I would definitely recommend it to anyone.”